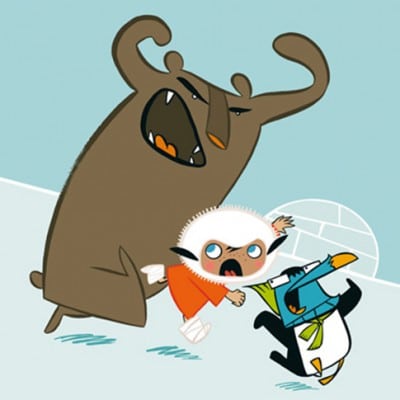 GRENADINE AND PEPPERMINT (78x7’), set to debut on TF1 in 2011, is based on the books "Grenadine and Peppermint" published by Editions MILAN, created by Colonel Moutarde in collaboration with Trap, Dumez, and Marmelade. The series tells the story of a little Inuit girl who is curious, energetic and who loves to get into mischief. In spite of the hostile environment in which she lives - stretches of snow as far as the eye can see surrounded by ice cliffs – Grenadine is always dreaming of new horizons. She loves to discover things and is always inventing a thousand wild adventures. Adventures with a capital A. Dangerous missions, strange investigations, commando operations that she gets into with her friend Peppermint, a usually placid penguin whom she thinks has the right stuff to make a super hero. Although he is rather lethargic, Peppermint accepts to play the super hero role so he can keep Grenadine's esteem. This unusual duo, which feeds on the secret needs of the other, is at the center of all the adventures of the series. Produced in 2D HD by Patoon-Animation for TF1, GRENADINE AND PEPPERMINT is its second production, after the previous hit series “LULU’S ISLANDS”.

NINA PATALO (39x 7’), based on famous comic book albums by author Lisa Mandel, published by GLENAT, produced by “Je Suis Bien Content” and set to debut on France Televisions network, in 2011, tells the amazing story of ten-year-old Nina who is fed up with being told what to do by her parents. One night, Nina wishes they would just disappear. Next day, to her amazement, her mum and dad have vanished in the air! As days go by, Nina makes a new family for herself with Andy the duck, Patalo a mini monster, and Walter, a defrosted caveman. Nina Patalo tells about the crazy life of a little girl living with a new and decidedly kooky family. Each episode of the series will provide a dynamic depiction of the tribe’s interactions, adventures and emotions. Produced in Flash and using After Effects, already employed by “Je Suis Bien Content”, the series reflects the true vision of the original author.[/vc_column_text]