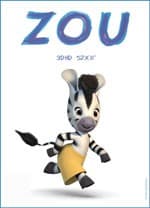 ZOU (52 x 11’), based on the books of Michel Gay, published in 17 countries and in France by the upscale publisher L’Ecole des Loisirs, recipient of the US Parents’ Choice Award, has been signed for a development of a new pre-school series for Playhouse Disney in Europe. The series tells the story of the everyday life of Zou, a five year-old zebra and his family, living a contemporary life in a zebra town. Through Zou’s inquisitive, cheeky but innocent eyes, the series will touch on all of the themes of early childhood, taking small steps but making big discoveries!

Mlle ZAZIE (52 x 7’or 11’), based on the books by Thierry Lenain and Delphine Durand, published in ten countries, and a major book hit with Nathan publishing, has been signed for development by France Televisions for its channel France 5. Mlle Zazie or “What is it like to be a boy or a girl when you are 8 years old?” talks about the man/woman dialogue but from a schoolyard in the 21st century, thanks to Zazie and Max, the main two characters.

ACADEMIE ROYALE ( 52x11’), an original concept developed by Cyber Group Studios and Korean studio Sieun Design, targeting the 6 to 10 years old, and originally written by Françoise Boublil, Diane Morel and Pierre Sissmann, has been signed for evelopment by Teletoon, a subsidiary of the Canal Plus group. In “Academie Royale”, three exceptional princesses of the 21st century get the chance to win its ultimate prize, the sparkling diadem, even though at 12 years old, they’d much rather have fun, laugh and sing, anything but stick to the rules. Court etiquette, comedy and energy, sometimes even danger is at the core of the world famous institution.