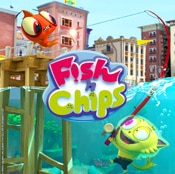 Paris-based Cyber Group Studios is coming to MIPTV with two very strong fast-paced comedies aimed at 6-10 years old, and is announcing some outstanding sales for the first quarter of the year.

Cyber Group Studios is thrilled to arrive at MIPTV with the first episodes of Fish’n Chips (52x13’), an HD CGI coproduction between Cyber Group Studios, Timoon Animation and the Korean company SAMG. This slapstick comedy is targeted to children aged 6 to 10 and will be aired in France on Gulli and Canal J. It follows the adventures of a champion deep-sea diver cat chasing a fish that dreams to be a mammal… for the ownership of a fishbone! The series has already been presold to Cartoon Network in Australia and New Zealand, Noga in Israel, IRIB in Iran, ATV in Turkey and Al Sayyar in the Middle East.

The first episode of another comedy series, Nina Patalo (78x7’), coproduced with Je Suis Bien Content for France 3 and Canal J, will be shown for the first time at MIPTV. This humorous series tells the life of Nina, an enthusiastic girl full of energy, and her new family: Andy the duck, Patalo a mini monster, and Walter, a defrosted caveman. This exuberant bunch of friends will take us on their most crazy adventures! "We're excited about launching these two very strong fast-paced comedies and our association with renowned co-producers, says Pierre Sissmann, Chairman and CEO of Cyber Group Studios. We are anticipating a high level of interest in these shows which also reflect an enlargement of our catalogue from pre-school animation to other areas of kids entertainment” Cyber Group Studios is also announcing an outstanding increase of its sales in the first quarter of the year, just ended, as the sales below indicate. “The level of activity for our programs in the first quarter has been very good, declares Carole Brin, Head of International Sales and Acquisitions, and reflects the increasing value of our catalogue and the appetite of broadcasters for innovative and global quality content”.

Tales of Tatonka, which was launched at MIPCOM, has been so successful that Cyber Group Studios has decided to continue the production with some 12 new episodes, and add a 2-minute-segment of HD wildlife footage. The series, 52x13’ in its new format, is already performing very well in France, and will start airing this year on RAI 2 in Italy, Karusel in Russia, TéléQuébec in Canada, etc. It is now present in 60 territories and has recently been picked up by Okto in Singapore, France TV, TVB in Hong Kong, RSI in Switerland, Minimax in Hungary and RTBF in Belgium.

Cyber Group's latest production Zou (52x11') has just been presold to France TV, Télé Québec in Canada, YLE FST in Finland and Channel One's Karusel in Russia. The preschool series, based on the hugely successful books by Michel Gay, is being coproduced with Scrawl in Singapore for Disney EMEA, Australia and New Zealand. The series is set to debut in September 2012.

Cloud Bread (78x7'), a beautiful and poetic series produced by the Korean company GIMC for regular and stereoscopic broadcast, and distributed by Cyber Group Studios, has just been confirmed by TG4 in Ireland and YLE in Finland. The show is meeting some great success, and has just been nominated at Anifest in Czech Republic, at the Annecy Festival and at the Pulicinella Awards - Cartoons on the Bay.[/vc_column_text][vc_row][vc_column][/vc_column][/vc_row]