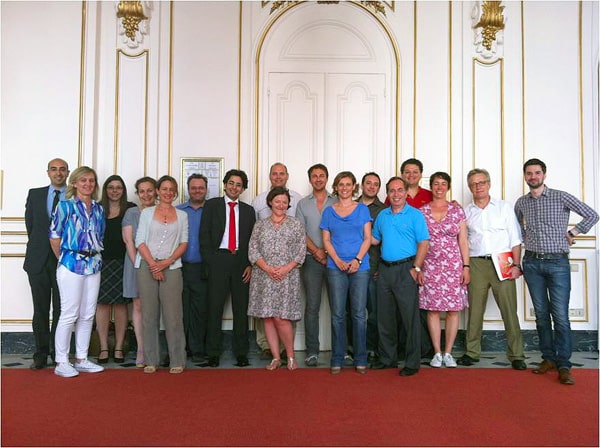 For the 2nd year in a row, Cyber Group Studios hosted on Monday June 27th, this year’s Semi- Final round of judging for The International Emmy Awards in the category of Children & Young People (English-Language).

The International Academy of Television Arts & Sciences recognizes excellence in television produced and aired outside of the United States at a black-tie event in New York, attended by major figures from the global television community. The event took place at the St James & Albany in Paris and the jury was composed of several leading TV executives from some of the biggest television broadcasters around the world: The Walt Disney Company, Cartoon Network, France TV, Spacetoon, ZDF, BBC, Rai, etc. The jurors devoted the entire day to the judging process, which was supervised by the Emmy Judging Director; Ernst & Young will tabulate the votes. The programs screened comprised productions from the UK, Canada, Australia and New Zealand. “We are very honored by our partnership with the Academy, and delighted we were able to attract some key representatives from many countries to participate to this event”, declared Pierre Sissmann, Chairman and CEO of Cyber Group Studios, and an active member of The International Academy of Television Arts & Sciences. “The quality and diversity of the shows produced for kids around the world is amazing and really motivating. You can feel a common ambition for content in all the shows that we have screened”, declared Julien Borde, Director Children and Youth Program Director, France Televisions. Arne Lohmann, Director of Coproductions of ZDF Enterprises, added "I was impressed by the variety and quality of the semifinalists. Therefore the final decision was a difficult one. Thanks to all participants and their great work." “It was an honour to sit on the Emmy semi-final jury in Paris, finally commented Jackie Edwards - Content and Acquisitions Manager at CBeebies. It is so refreshing and invigorating to be reminded of the breadth and quality of programming available to children and young people internationally, and I'm very proud to be a part of the rigorous selection process for this award." The results of this event will be combined by the Academy with the other semi-final results, and the winner will be announced at The International Emmy Awards Gala on the 21st of November in New York.