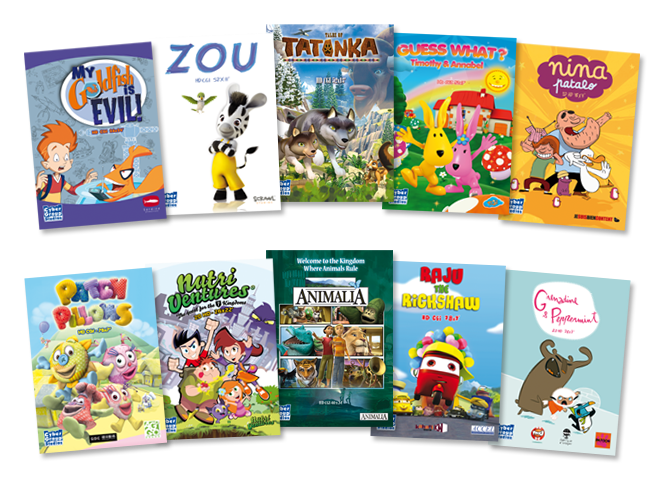 Cannes, March 30th 2012. Paris-based Cyber Group Studios will introduce this MIPTV their own production Mademoiselle Zazie as well as launch the Canadian series My Goldfish Is Evil. The company is also confirming a boom of its sales.

Cyber Group Studios will also be starting at MIP some presales of their new animation Mademoiselle Zazie (78x7’). Coproduced by Cyber Group Studios and Scrawl Studios for France Televisions, the series is aimed at children aged 5-8 years old, and tells the well-paced and realistic little adventures of Zazie and Max, the best of friends, in a resolutely contemporary world. Cyber will be showcasing for the first time a little clip illustrating the colourful and lively universe of the series. First episodes will be launched at MIPCOM 2012, and the completion of the series is planned for spring 2013.

Cyber Group Studios is also thrilled to announce that it has taken over the distribution of the series: My Goldfish Is Evil (26x24’). Produced by Sardine Productions for CBC and SRC in Canada, the series follows the adventures of a pre-teen boy, Beanie, and his pet goldfish, Admiral Bubbles, who actually has dreams of bringing a reign of terror on the city and of world domination. The series has been outperforming worldwide, and has already been aired on ITV in the UK, ABC in Australia, Noga in Israel, MNet in Africa, etc.

Cyber Group Studios is delighted to announce a raft of its sales for the 1st quarter.

Zou (52x11'), the HD CGI series, coproduced by Cyber Group Studios and the Singaporean based company Scrawl Studios, has convinced some new channels such as Disney Japan, RUV in Iceland, TG4 in Ireland, AVA in South Korea and S4C in Wales, adding to a growing list of more than 100 territories that have prebought the show : The Walt Disney Company in Europe Middle East and Africa, in Latin America, in Australia, in New Zealand, and in South East Asia, as well as France Télévisions, Télé Québec in Canada, TV2 in Norway, YLE in Finland, Karusel in CIS and Welpol in Poland.

Tales of Tatonka (52x13’), produced by Cyber Group Studios for Tiji in France and just completed, is continuing its road to success. The series has already been sold to more than 50 broadcasters, covering over 100 territories. The series has just been picked up by Boomerang in Italy, MTVA and FilmsReel for DVD in Hungary, Canal Panda in Portugal, TVES in Venezuela, Urania for DVD in Eastern Europe, KTH in Korea, Al Hijrah in Malaysia, CFI in Africa, TV5 worldwide, etc. And Cyber Group Studios is currently finalizing some negotiations with a regional network in Asia, as well as with major broadcasters in Belgium, in Colombia, in Brazil, and in Poland. The series is actually outperforming on the channels which have already started airing the series.

After a successful launch on pay TV channel TiJi, Tales of Tatonka registered the second best performance of 2011 for a weekday morning cartoon aired on France 5. In Italy, Tales of Tatonka was to be found on Rai 2, and the series averaged the second best score of the Cartoon Flakes strand over the second semester of 2011, outperforming popular titles such as Winx Club and Disney's Phineas and Ferb. On TV2, the main private channel in Norway, Tales of Tatonka ranked among the ten top rating cartoons on TV2 of 2011.
The series has just been nominated in China at the 11th Sichuan TV Festival – “International Gold Panda” Awards, in the category “Best Animation Series”.

Al Hijrah in Malaysia, Hop Channel in Israel, POD in Thailand, and Pop TV in Slovenia have jumped on-board for CGI preschool series Guess What? (78x7’), adding to a growing list of more than 80 territories that have acquired the show. Others include Al Sayyar and ATE (Middle East), Tiji Russia, Canal Panda in Portugal, Content Union in Kazakhstan, Yoopa in Canada, Irib in Iran, Kim Media in South Korea, Mediacorp in Singapore, POD in Thailand, Pop TV in Slovenia, PBS in Malta, Rai Yoyo in Italy, Spectrum in Indonesia, TVB in Hong Kong, TRT in Turkey, TV2 in Norway, and the French leading preschool channel that actually initiated the show : Tiji. And the series will actually be soon launched on Gulli.

The humorous and exuberant series Nina Patalo (78x7’), coproduced with Je Suis Bien Content for France 3 and Canal J, has just been inked by TV5 Worldwide, Canal Panda in Portugal, and RUV in Ireland. The series is outperforming on France 3, where it has proved to be one of the flagship local brands of the second semester of 2011. Nina Patalo has just been nominated at the Official Selection of Annecy.

Patch Pillows (78x7’), produced by GDC and AGOGO Corporation, which got the Kids Jury Award at MIPCOM Junior 2011, has been confirmed by Prava I Prevodi in Serbia, Hop in Israel, and Minika in Turkey.

Nutri Ventures (26x22’), the adventures series produced by Nutri Ventures Corporation and introducing children from 6 to 10 y.o. to the world of healthy eating will be aired on RTP and Canal Panda in Portugal, MTVA in Hungary and Noga Communications in Israel.
Animalia (40x24'), the Emmy-Award series produced by Burberry Production, Lux Monky and DoubleBase, and distributed worldwide by Cyber Group Studios, has already been sold in 130 countries. Cyber Group Studios recently inked sales of the programme with MTVA in Hungary, Prava I Prevodi in Serbia and ERT in Greece. The series is now in discussion with major broadcasters in Mexico, and Brazil.

Raju (78x7'), an enlivening and entertaining Indian CGI preschool series, produced by Accel Animation in India, has just been picked-up by MCD in Turkey, MTVA in Hungary, Kim Media in South Korea, and Urania in Czech Republic.

Grenadine and Peppermint (78x7'), a comedy series for 6-10 year-old kids and coproduced by Patoon, Cyber Group Studios and La Fabrique d'Images for TF1, has just been acquired by Tiivi5 in the US, POPTV in Slovenia, and MTV Oy in Finland.