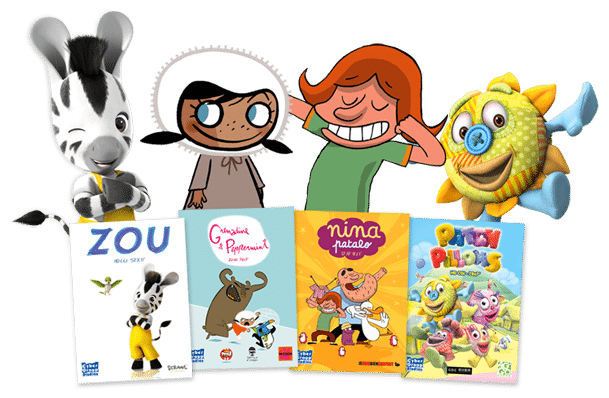 Receiving 1500 animated works from the world every year, the festival will take place on 18-22 of July 2012, in Seoul, Korea. The Final Selection will be conducted during the festival, where the International Jury is responsible to decide the award-winning series.

Animated preschool series Zou (52x11’), telling the story of the daily-life of a five year-old zebra and his family, who live all together in a ‘’Zebra town’’, touches all themes of early childhood. Premiering this fall in more than 106 territories, the young zebra Zou is already very successful across the world. The series is produced by Cyber Group Studios and Scrawl Studios, and is based on a book by Michel Gay awarded ‘’Parents’ Choice Awards’’ in USA.

Patch Pillows (78x7’), produced by GDC and AGOGO, already got the award of MIPCOM Kids Jury in 2011. With noteworthy interactive and educational components, this funny series about a group of pillows dressed in patch work and living at their colorful home in Patch Valley offers kids a different moral lesson on every episode.

Nina Patalo (78x7’), co-produced with Je Suis Bien Content for France 3, is a fast-paced and crazy comedy for kids and family full of twists. Curious and playful Nina having a hyperactive imagination shares the same house with a bunch of unusual friends such as Andy, the punchy duck, Walter, the caveman and Patalo, a ‘’Polymorpho’’. Together with this extraordinary company Nina Patalo takes us on the most crazy and comic adventures.

Grenadine & Peppermint (78x7’), coproduced with Patoon and La Fabrique D’Images, for TF1, revolves around a little Inuit girl and her penguin friend. In the icy surroundings they experience plenty of adventures, strange investigations or operations. The series was already nominated at Cartoon on the Bay in Italy, at Anifest in Czech Republic and at Montreuil Children’s Book Fair in France.