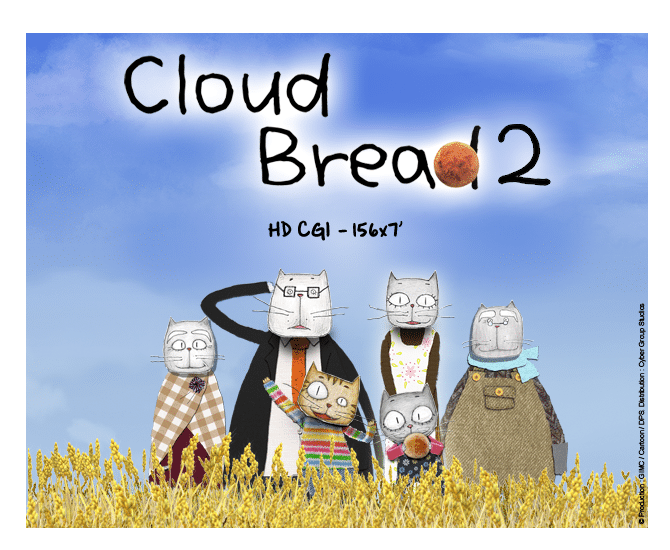 Cannes, October 5th 2012. Cyber Group Studios is thrilled to announce the signature of an agreement with GIMC from South Korea for the distribution over Europe, Middle East and Africa of the second season of “Cloud Bread”.

The series, which was the first 3D stereoscopic series for preschoolers, is now composed of 156 episodes of 7’. The second season’s preproduction was overseen by the New York-based company “Little Airplane Productions”.

"Combining the design and animation approach of GIMC (Korea) and the story development and US-style curriculum and research techniques of “Little Airplane” (US), the new season of “Cloud Bread” promises to extend its reach around the world and become a truly global franchise,” declares Daniel You, Senior Vice President / Business Development and Marketing, at GIMC.

"Little Airplane” was thrilled to work with the team at GIMC on preproduction of “Cloud Bread 2”. The new season was headwritten by Emmy-award winning writer Billy Lopez (“Wonder Pets”, “3rd & Bird”) and the show's curriculum crafted by Dr. Christine Ricci (“Dora the Explorer”). We believe that children all over the world will enjoy the new season of Cloud Bread."

“The series has already been aired on KBS in South Korea, CCTV in China, YLE FST in Finland, TG4 in Ireland, POP TV in Slovenia, IRIB in Iran, RTV in Slovenia, etc. and we’re sure that the new pace of the second season will convince some additional broadcasters”, says Carole Brin, Head of Intl Sales & Acquisitions at Cyber Group Studios.