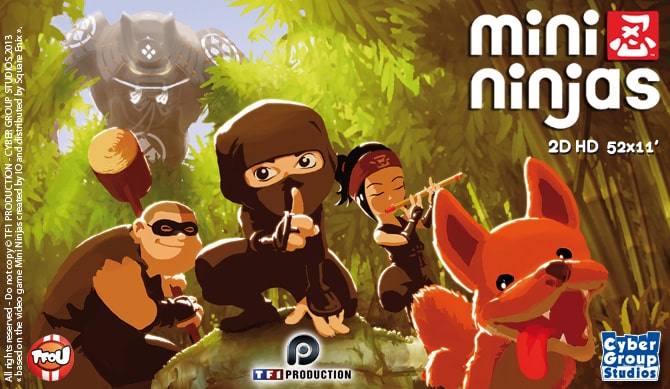 New-York, Feb 3rd 2013. At the occasion of Kidscreen 2013, TF1 Production has announced the commencement of production of its first TV animated series, based on the “Mini Ninjas” best seller online and off line video game distributed by Square Enix.

Cyber Group Studios, as the executive coproducer, will be also in charge of worldwide distribution.

Adapted from the famous “Mini Ninjas” video game, which already sold over one Million units since 2009, the series will be comprised of 52 x 13 2D HD episodes. Targeting 6 – 10 years old, this action comedy series follows the adventures of a new generation of ninjas. A cool cast of bold and lovable characters, trained by their Ninja Master, who fight to liberate innocent animals transformed into fearsome samurais by the wizard warlord Ashida.

“The Mini Ninjas” brand, already well known by kids all over the world, will find a perfect home on “TFOU”’s programming slot, bringing both comedy and adventure with great heroes” says, Yann Labasque, Head of TF1’s Youth entertainment unit.

“It is a challenge and a pleasure to be handling such a terrific brand for TF1 Group. Three companies will be involved: TF1 Production as the main producer, TF1 as the broadcaster in France and TF1 Licenses, as the worldwide merchandise licensing agent” says Céline Roux, Director at TF1 Production, while Producer Giovanna Milano adds “MINI NINJAS is that kind of rare concept which appeals both commercial and public channels, like TF1 and RAI. The Italian pubcaster is also already committed and major creative talents are on board to deliver great storytelling and visuals to the international market".

“It is a pleasure and a great responsibility to be associated to TF1 Production for its first animated production, concludes Pierre Sissmann, Chairman and CEO of Cyber Group Studios, and we hope that our joint efforts will contribute to delivering to kids worldwide the entertainment they have always experienced with the brand in extending its reach even further”.