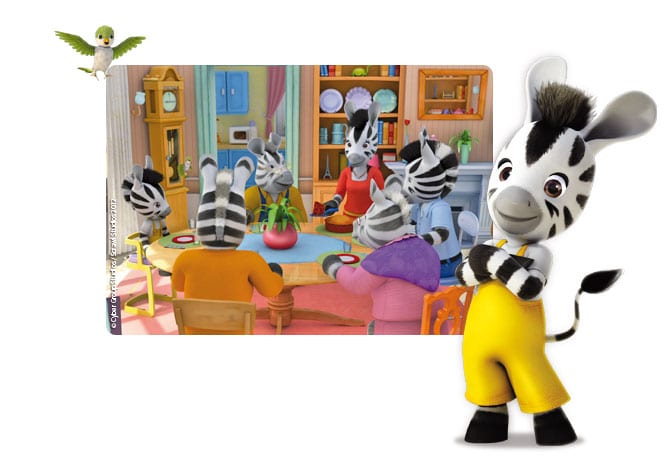 “Zou” (52x11'), the HD CGI series, coproduced by Cyber Group Studios and the Singaporean based company Scrawl Studios, launched with success in Germany on Disney Junior on December 26th 2012. Called Zeo on the German market, like the books of the original author Michel Gay, the series outperformed on the preschool segment, and the brand will soon be available on additional platforms.

The series actually convinced the Free-to-Air family channel Super RTL which just acquired it and will start airing this upcoming fall. Carsten Goettel, Programme Director of SUPER RTL says: “We instantly liked ZOU, it’s a warm and charming series with stories mainly about the everyday life of kids and their families. It perfectly suits SUPER RTL’s positioning for a pre-school audience. We are very pleased to be able to show the series on SUPER RTL’s preschool slot TOGGOLINO starting this fall and hope it will delight both children and parents with its lovable characters and playful stories.”

“We value very much this new partnership with Super RTL, one of the top European networks, following its initial success with Disney Junior, we have big plans upcoming for Zou’s future in Germany,” declared Carole Brin, Head of International Sales and Acquisitions for Cyber Group Studios.

Cyber Group Studios also sold the Home Video rights to the Hamburg-based company WVG. Five individual DVD’s Boxes will be released on the German market starting Easter 2014, to be followed by a complete boxset for Christmas. And Edel Kids will also be launching thirteen audio-storyteller books starting from beginning of 2014.

The series is finally becoming interactive with a Zou-dedicated Facebook page and the release of an animated ebook, all in German, end of April. And Cyber Group Studios has planned to launch a set of apps and additional games on the German App Store and the Android markets for summer 2013.

Zou, which received the Kids’ Jury Award at the prestigious Chicago International Children’s Films Festival 2012, has also just been nominated at the 20th Stuttgart International Festival of Animated Film for Children.