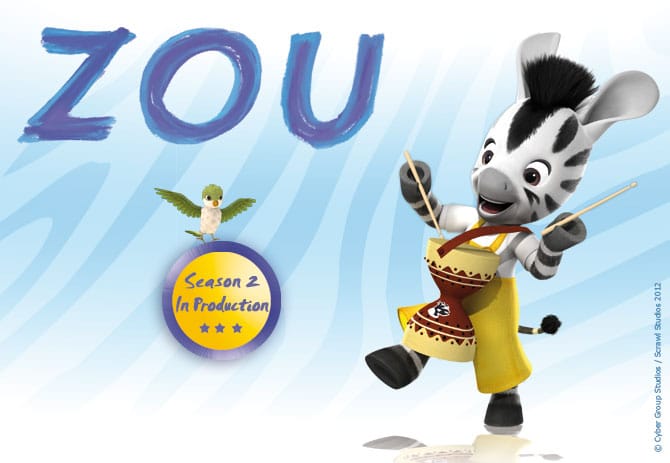 Based on the successful books by Michel Gay, the 104 x 11 minute series teaches young viewers valuable lessons about growing up and family, with the help of a delightful five-year-old zebra called Zou.

ZOU has achieved worldwide ratings success and earlier this year became the #1 series on France 5. In the UK, the first season of ZOU performed exceptionally well on Disney Junior and at the time of launch in May 2012 became the second best launch ever on the channel behind Jake and The Never Land Pirates.

Patricia Hidalgo, Vice President, Content & Programming Strategy, Disney Channels EMEA comments: "We are delighted with the addition of a second season of the French produced and distributed animated preschool show, ZOU, to our successful roster of Disney Junior shows in EMEA. This underscores our ongoing commitment to create programming content with the very best creative production companies from markets across Europe. ZOU features endearing characters, imaginative storytelling and showcases the theme of family values, which is a winning combination with young viewers and their parents."

“After such a wonderful start, we are thrilled to be already embarking on a second season so early on, while all foreign dubs of the first season have yet to be delivered. This is testimony of the trust from our partners and to the huge initial audience success of the series”, says Pierre Sissmann, Chairman and CEO of Cyber Group Studios.

One year on since its premiere, ZOU has been sold in more than 140 territories and broadcasted in 24 different languages throughout the world by the end of 2013, reaching over 100 million kids simultaneously. Channels include Disney Channels EMEA, as well as Latin America, Australia, New Zealand, Japan, and South East Asia, France Télévisions, Super RTL and WVG in Germany, TSR and RSI in Switzerland, YLE in Finland, TV2 in Norway, RUV in Iceland, TG4 in Ireland, S4C in Wales, ETV in Estonia, Welpol in Poland, Karusel in CIS, TRT in Turkey, IRIB in Iran, Channel B in Indonesia, Thai PBS in Thailand, Momo in Taiwan, KBS Kids in South Korea, Zee Learn in India, Télé Québec in Canada, Multirio in Brazil, CFI for Africa and TV5 Worldwide.

Cyber Group Studios is in final negotiation with a major network in the US, where it was awarded the 1st Children’s Jury Prize at The Chicago International Children's Film Festival, the oldest and largest film festival for children in North America, in November 2012.

ZOU has also shown very strong licensing and merchandising potential. In 2012, Cyber Group Studios signed contracts with four major European book publishers in France and Italy including LAROUSSE, HEMMA, HACHETTE and SALANI. Altogether, 69 books covering all the key publishing segments will be released throughout French-speaking Europe in the next three years. Edel Kids in Germany will launch audio books in 2014, and Cyber Group Studios has also confirmed toy-deals in continental and Eastern Europe with four major licensees including BAOBAB, PLAY BY PLAY, FLEXMETAL, RAVENSBURGER and MIKRO trading. A host of other licensing deals are currently in negotiation.

ZOU has also gone interactive. In February 2013, Cyber Group Studios announced the launch of the first eBook featuring the adventures of ZOU, which is set to be released in 15 languages throughout 2013, as well as a ZOU dedicated website and Facebook page. Cyber Group Studios is also planning to launch a set of apps and additional games on the App Store and the Android markets for summer 2013.