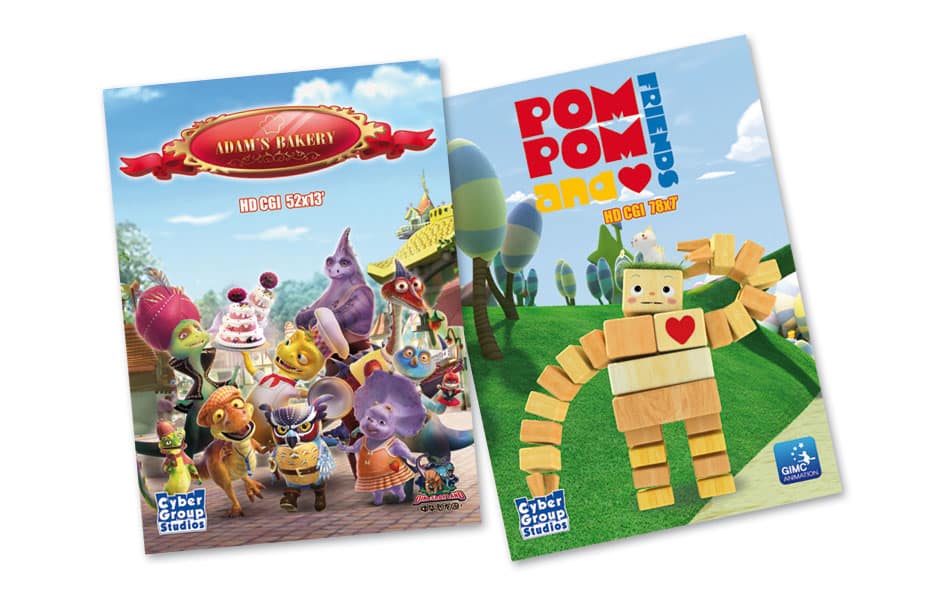 Upper-preschool series Adam’s Bakery (CGI HD 52x13’), portrays Adam and his dinosaur friends living in a beautiful and colorful forest town: Shangri-la. Being a talented apprentice of the baker master, Adam is preparing some very special recipes with the Magic Baking Machine. Lollipops changing moods or jelly helping to become invisible, Adam will always prepare these recipes with one main goal: help their friends and neighbors get out of trouble in their adventures and also bring a lot of fun to the small town!

‘We do believe Adam’s Bakery and its positive and funny animation style will be popular among the young kids and will bring happiness to millions of the families all over the world’, commented Tian Enming, Vice President of Changzhou Dinosaur Land Culture and Creativity Co., Ltd.

‘Pom Pom and Friends’, a stereoscopic series for preschoolers, is composed of 78 episodes of 7’. It tells the story of POM POM, a hero with a very big heart! Like the kids of his age – 5 years-old, he is very enthusiastic and still learning and figuring out how the world works. He’s always eager to jump in and try things right away! This interactive show aims at encouraging kids to observe, experiment, and make exciting new discoveries, while solving problems with creativity!

‘In this television series of intuitive exploration, Pom Pom and Friends is set to inculcate confidence, trust, and cohesiveness in the minds of children. We have combined an excellent team to work on the show: the series is written by Carter Crocker, a two-time Emmy Award writer renowned for the Winnie the Pooh series and it was directed by an Annie Award nominated veteran Woody Yocum, known for ‘Sofia the First’, ‘Ben10’, ‘The Real Ghost Busters’, ‘Alien Force’. Larry Huber, Executive Producer of Dexter’s Laboratory and Chalk Zone, supervised the show adding a great deal of humor and creativity, commented Dr. Heungsoo Park, the President and CEO of GIMC.

“We are thrilled to bring to the market these two new series, commented Carole Brin, VP International Sales and Acquisitions of Cyber Group Studios, and are convinced both will be great addition to our pre-school and upper pre-school catalogue, bringing satisfaction to our clients and entertainment to millions of children worldwide, like our other productions.”