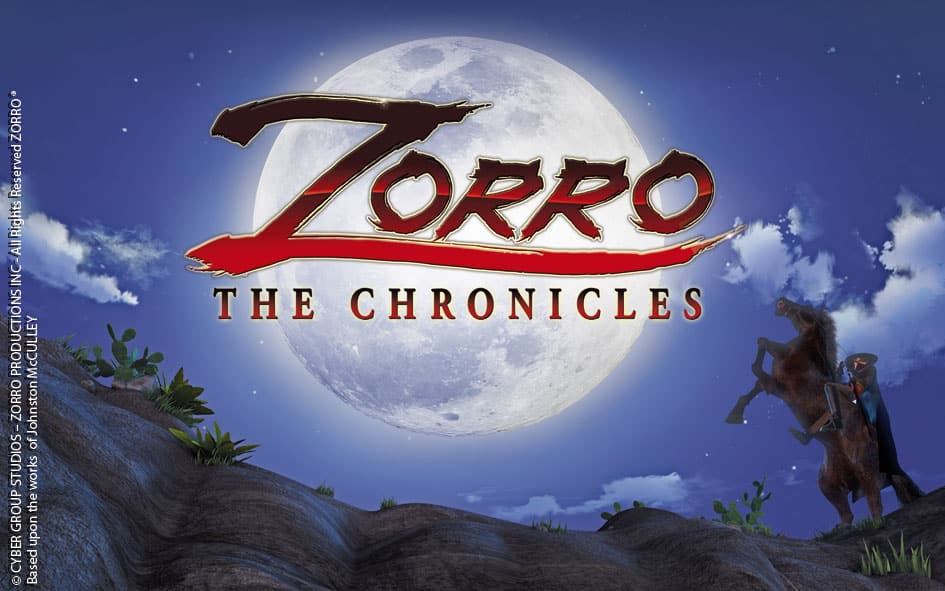 Cannes, October 7th 2013. Paris-based Cyber Group Studios is pleased to announce the official launch of the production of its CG-animated series
for kids and family ‘Zorro the Chronicles’.

“Zorro the Chronicles” (26x22’) produced by Cyber Group Studios for France Télévisions and RAI offers a new animated incarnation to the most internationally famous hero of all times - the masked swordsman Zorro. It introduces an extraordinary character - a teenage Don Diego, who faces the greatest challenge of his life as he fights for justice against numerous unscrupulous – and well-armed – tyrants! The show focuses on the original Zorro’s qualities and depicts accurately some of California’s locations and history.

“We seek to introduce to a new generation this legendary hero, always fighting for justice, in a different way, with the highest quality of CGI animation, great stories and compelling characters”, says Pierre Sissmann, Chairman and CEO of Cyber Group Studios. “With bad guys plotting and Zorro's cunning tricks and jokes – not to mention spectacular fights, we offer a nice mix of action and comedy, with the power of animation”.

Produced in collaboration with Blue Spirit Studios (“Mysterious Gold Cities”), the show will benefit from CGS’s newly developed technology in rendering, lighting and asset building. “To render an extraordinary story, we needed to have an extraordinary image and developed new technology tools for that purpose,” says Olivier Lelardoux, studio chief and series director.

On top of the acquisition by France Télévisions and RAI, the series has already been pre-bought by the Flemish-speaking channel VRT in Belgium, by Tele-Quebec in Canada, Boing (Turner Broadcasting System Europe) in France and TV2 in Norway. In addition to that, Cyber Group Studios is on the final steps of the prebuy acquisition by RTVE Clan in Spain.

“We have high hopes for “Zorro the Chronicles” as a great new entertainment production for kids and families, says Carole Brin, VP International Sales and Acquisitions of Cyber Group Studios, as proves our initial presales to five major public broadcasters across the world”.
Zorro the Chronicles first episodes are expected to air internationally by end 2014.

“We are happy to welcome one of the iconic heroes of youth entertainment. We take pride in having worked on the project with Cyber Group Studios since its origin and to have supported the great ambitions of this production: full CGI and the comedy adventure, matching closely the original work”, commented Pierre Siracusa, Head of Animation of Children and Youth Department in France Télévisions.