Cyber group studios to develop “the pirates next door” 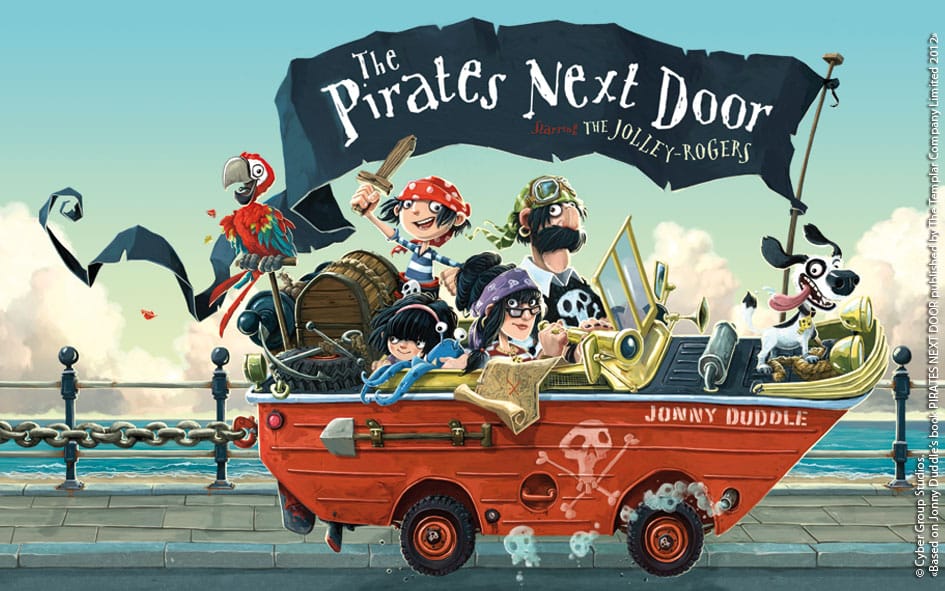 Paris, February 7th 2014. Cyber Group Studios is pleased to announce that it has concluded an agreement with Templar Publishing, the highly respected Publishing house, to develop several animated series.

The first series will center on “The Pirates Next Door”, a fast-paced comedy for 6-8 years old in 52 x 11 minute episodes. Published worldwide in over 15 countries, the original book won the UK’s famous Waterstones Children’s Book Prize in 2012.

“We are thrilled to be able to work with such a talented graphic and literary artist as Jonny,” says Pierre Sissmann, President of Cyber Group Studios, “and we look forward to taking this award-winning book and great story to the audiovisual screens.”

In “The Pirates Next Door”, the animated series, humour and action-packed adventure come hard on each other’s heels in this fantastic story of pirates who settle in a tiny seaside town. Bringing a touch of madness and laughter that turns the whole neighborhood upside down, their arrival also opens the door to a new friendship between Matilda, the daughter of the next door neighbours, and Jim, the son of the Jolley-Rogers pirate family. Their story recognizes diversity and celebrates differences.

While the development of the series has just started, Cyber Group Studios plans to release a new preliminary art and literary bible in 2014.

"I’m thrilled to team up with Cyber Group Studios, and can’t wait to see where they take my stories and characters. It’s been a dream since childhood to see my ideas on screen, and I’m sure the artists and animators at Cyber Group will do a fantastic job of bringing my characters, and the worlds they live in, to life." adds Jonny Duddle.

“Jonny has sold over a million books worldwide in over 15 countries, 400,000 of those in the UK alone. As Jonny came to us from an animation background, an animated series is the next logical step and Cyber Group Studios are the perfect partner. They combine the quality of theatrical animation with an incredible wealth of experience and proven success at bringing animation to the market,” concludes Mike McGrath, Templar Managing Director.