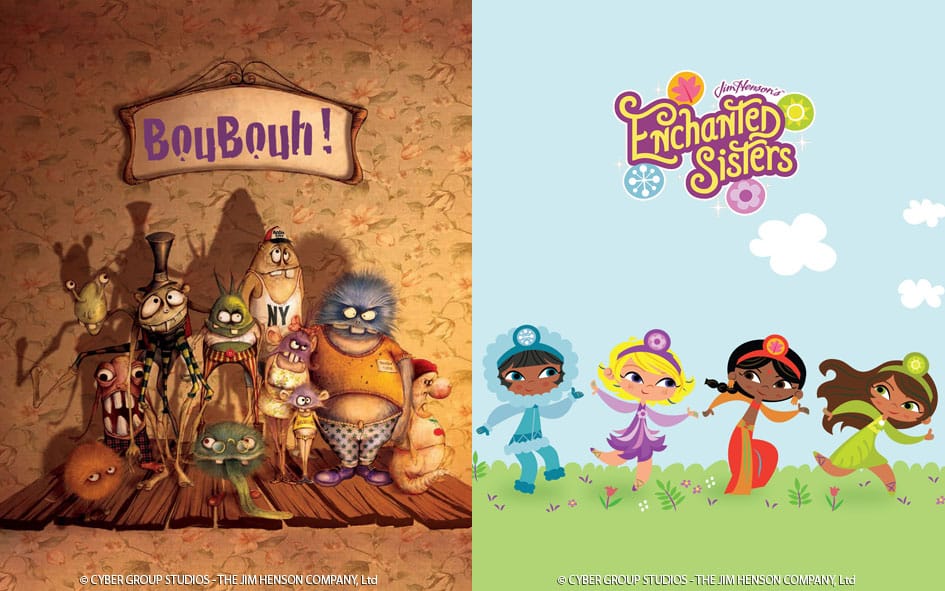 “In building out a new fantasy world for older kids that will feature the visual excellence we are known for, we are grateful to partner with Cyber Group Studios, whose quality animation and top-tier creative team will be sure to serve the rich, exciting stories of Enchanted Sisters very well,” commented Stanford. “Co-producing with Cyber Group Studios on two projects that are such natural fits for each of our companies—Jim Henson’s Enchanted Sisters has a very European fantasy flair, and Boubouh! delivers the unique visual charm that is synonymous with The Jim Henson Company’s productions—will be a delight as we combine our talents to develop these wonderful properties.”

“It’s an incredible opportunity to work with such a distinguished partner as Cyber Group Studios,” added Goldsmith. “All of us here at The Jim Henson Company are confident that this collaboration will result in two original and highly anticipated new series, both of which will have mass appeal to children and—in the tradition of Henson—their parents, all around the world.”

“We are extremely pleased at Cyber Group Studios of this association with such a talented and renowned company, as The Jim Henson Company,” commented Pierre Sissmann. “Both our organizations and executives share a long tradition of providing the best children and family entertainment around the world. And we are excited and convinced that these two productions will be able to gather the best skills of both teams in creative vision and execution and provide great entertainment to all.”

Jim Henson’s Enchanted Sisters is an animated series for children ages 5–8 years old with fantastical comedy-adventure stories featuring the Sparkles: Spring, Winter, Summer and Autumn, four sisters who come together every three months to join their Mother Nature in a ceremony that changes the seasons in our world. Their world is magically different from our own, yet the Sparkles are completely relatable. They are confidently themselves, even when that’s the hardest thing to be. Based on the popular book series of the same name, Jim Henson’s Enchanted Sisters will appeal to girls and boys alike, with its comedic stories and heartfelt adventures. Continuing with the longstanding Jim Henson Company tradition, the message in these stories about strong girls (and boys) making bold choices are clear: embrace and celebrate our differences; anyone can be a hero; and families come in lots of different packages. Elise Allen, who has previously written episodes of Sid the Science Kid and Dinosaur Train, and the author of the book Anna’s Icy Adventure (Disney Frozen), will serve as the writer for the series.

Based on the book Boubouh! written by Ingrid Chabbert and illustrated by Amandine Duggon, Cyber Group Studios’ Boubouh! stars a typical monster (of the same name)—he’s hairy, he squints, and has two huge teeth—he’s the type of monster that would normally scare kids out of their wits. Except Boubouh is not typical—he’s frightened of kids and for a monster that really is a disgrace! After coaching from Glups, an old teddy bear who is a whiz with kids, Boubouh finally overcomes his fear and now his best friend is six-year old Lucas who is ready for adventure! But there is no way Boubouh can admit this to the monster world. He will have to deal with his status as a non-conventional monster and secretly steer his way between the world of monsters (who would take a very dim view of his ruining centuries of nightmares, nocturnal terrors and other such delights...), and that of the humans (who have one or two totally unfounded prejudices about hairy beasties). But leading a double life when you’re hairy, cowardly and personally trained by a teddy bear is not likely to be a bed of roses!