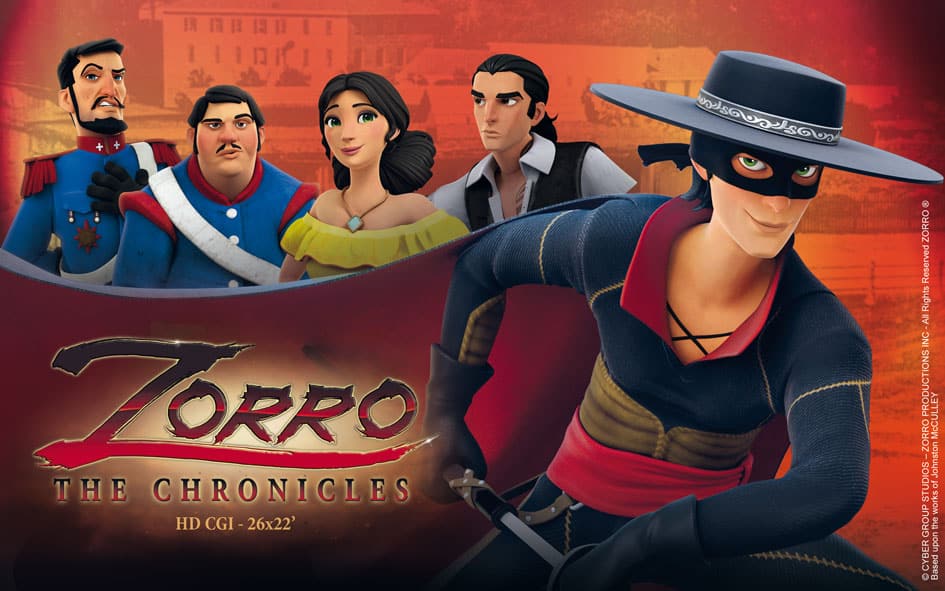 This latest telling of the masked superhero’s story - created in 1919 by pulp master Johnston McCulley - is the first-ever CGI adaptation of the adventures of Zorro. The show will benefit from CGS’s newly-developed technology in rendering, lighting and asset building, which gives the series feature-quality visuals and a truly realistic feel.

“It is a great creative responsibility to produce a new Zorro series, as Zorro is such a famous character that talks to generations worldwide. I am thrilled that both France Televisions and RAI have embarked very early on this project,” says Pierre Sissmann, President, Cyber Group Studios. “I want to thank them, as well as Zorro Productions International, for their trust, support and advice all along the production.”

“We are very proud to offer to a new generation of kids this 3D animated version of the exciting, iconic character, Zorro. It's a pleasure, ever renewed, to follow the adventures of the most famous caped hero, motivated by his unstinting love of justice and freedom, defeating his enemies without using violence but rather by making them become a laughing stock! The brilliant work of Cyber Group Studios production, the originality of the stories and the quality of the animation will captivate both families and children who will undoubtedly appreciate seeing this revisited and modernized version of a loved classic on France 3,” explained Tiphaine de Raguenel, Head of Youth Programs for France Télévisions.

“Zorro is a popular character, but it is especially the brilliant concept and the quality of the scripts that made us support the series since the beginning,” said RAI Fiction’s Luca Milano. “Zorro the Chronicles is a modern and contemporary series, and we are eager to show it on RAI’s channels”.

In addition to its original acquisition by France Televisions and RAI, the series has been pre-bought by the Flemish-speaking channel VRT in Belgium, by Tele-Quebec in Canada, Boing (Turner Broadcasting System Europe) in France, TV2 in Norway and RTVE Clan in Spain. The series is directed by Olivier Lelardoux, Cyber Group Studios Vice-President, from an original bible by Pierre Sissmann and Annabelle Perrichon, and original graphic designs by Christophe Rendu and Georges Bouchelaghem.

Organised by Reed MIDEM, MIPJunior will be held in Cannes on 3-4 October, ahead of the MIPCOM global entertainment content market. The inaugural MIPJunior World Premiere TV Screening of ‘Zorro the Chronicles’ will take place on Saturday 3 October late afternoon, at the Grand Hyatt Hotel Martinez in Cannes.