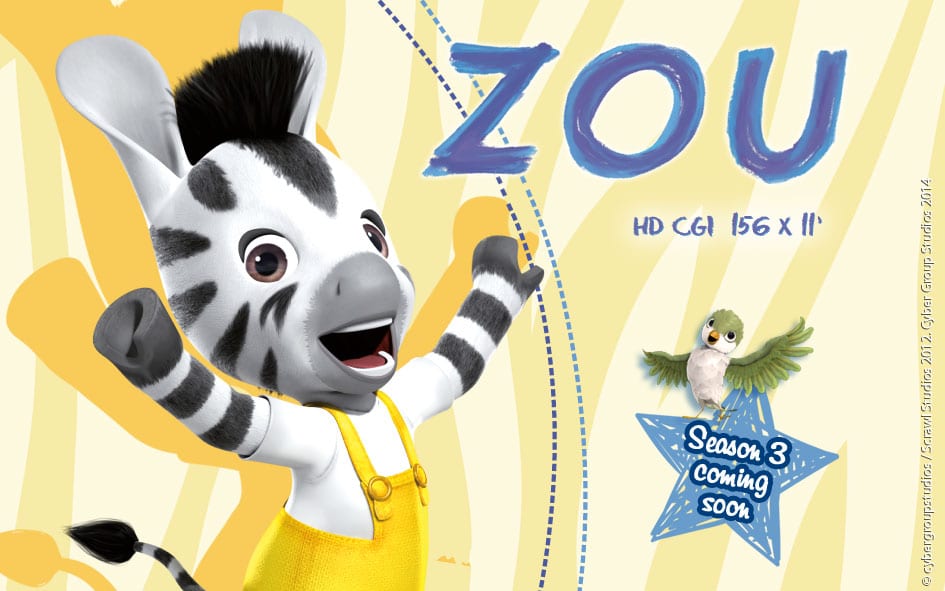 Due to be delivered to Disney EMEA for the first episodes as early as Fall 2016, the series, adapted from Michel Gay’s original books, will total 156 episodes of 11’.

Since the series launch in 2011, ZOU’s family adventures have been broadcasted in over 150 countries around the world in over 30 languages and watched by over 100 Million children.

In between 2011 and 2015, the series has received multiple awards internationally for the quality of its storytelling and animation, both from professional and kids’ jury. The animated series following the adventures of a lovable 5-year old zebra Zou, together with his family and friend Elzee living in a “Zebra town” was awarded the first prize in Television Animation at the 29th Chicago International Children’s Film Festival (CICFF) in 2012. In 2014 ZOU was nominated at the International Emmy Kids awards and it won the Cynopsis Kids Imagination Award for best New Preschool Show the same year. The little zebra was as well highly acclaimed by the pre-selection committee and was nominated for the Magnolia Award at the 19th Shanghai TV Festival.

“I am thrilled that our little zebra is continuing to entertain children and their parents all over the planet, declares Pierre Sissmann, as the family values of the series are truly universal and a testimony to the success of the series.”

“I want to particularly thank all the many broadcasters who have trusted the program, declares Marie Congé, VP Sales, acquisitions and New Media, as ZOU is present on a worldwide basis on all types of services such from apps, cable, linear broadcasting or SVOD”.

In the new season ZOU will share new family and friends adventures with all and in particular promote the practice of sports and discover the many joys and facets of arts and crafts. New selected characters will be added to the series to make it an always even more enriching experience and fun to watch.