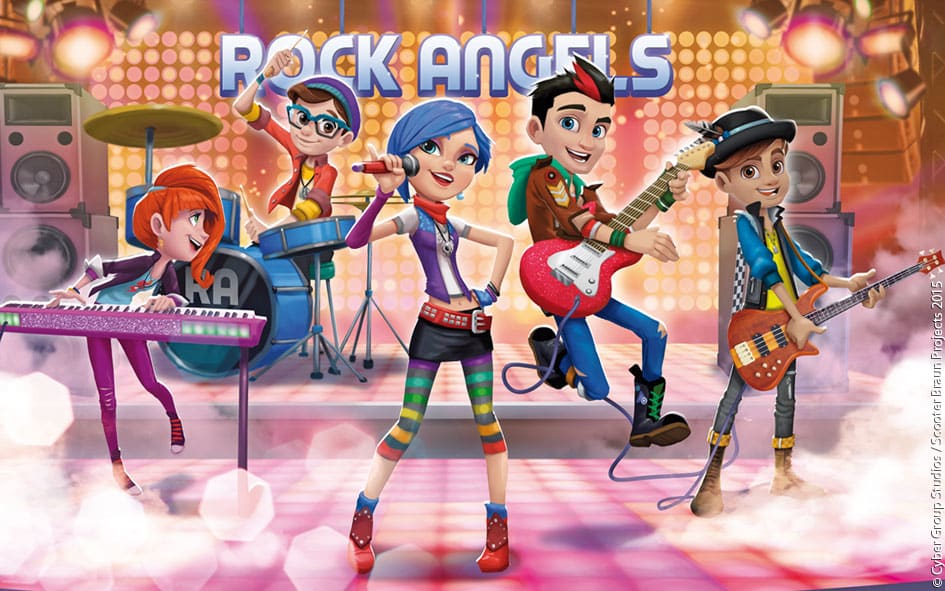 ROCK ANGELS will follow the exploits of a five member teen band, aged 12 to 15, comprised of the SKY ANGELS, a sweet sisters pop duo from Louisiana, Dayna and Cherie, and the ROCK ONS, a Detroit rock band of three cousins, Dev, Joey and Westin.

Tying for first place on BANDEMONIUM, the biggest musical talent competition in history, the two bands must now merge to form ROCK ANGELS, and become a new world sensation. It's a big adventure, but learning to live and grow together is the biggest adventure of all, as they embark on a major tour, record an album, shoot music videos and become world famous. ROCK ANGELS is a musical odyssey - the personal journey of five very talented individuals coming of age.

ROCK ANGELS the series, a 26x 22’, a full CGI show, will feature hit music created by Scooter Braun’s team and School Boy Records, while Cyber Group Studios will be in charge of giving life to the animation, using its latest developed CG and FX technology. The bible of the series has been co-written by Pierre Sissmann, Scooter Braun and Mike de Seve from Baboon Animation, who will also story edit the series. Scott Manson of SB Projects is also executive producing. ROCK ANGELS will take the audience on a whirlwind journey, from New York, LA and every US city in between, as well as international tours to Paris, London and Tokyo. In the process, five "kids next door" are transformed into world stars almost overnight and must grapple with all the issues this creates, both on stage and behind the scenes.

Targeting a 6-12 year old international audience, the first season explores everything from winning the competition and forming the band to their first tour and worldwide hits, as well as how success impacts the band members, their families and their friendships. Filled with comedy and thrills, each episode is a stepping-stone in the journey to young adulthood, a journey every kid can identify with.

The songs featured in each episode will be filmed as real music videos, just one part of the series' rich 360° digital exploration. The episodes will include digital content such as band members' dedicated Facebook and Twitter accounts as well as the exclusive release of the ROCK ANGELS first album on all platforms.

“We're excited to work with Mike, Pierre and Cyber Group Studios to develop innovative, inspiring and impactful television,” says Scooter Braun. “By bringing together strong content, cutting edge animation and original music, we hope to inspire kids by teaching them that through hard work and dedication, they can achieve their dreams.”

"What a dream team and what a project," says Mike de Seve. "Everyone is taking such pains to make this not just fun and funny -- lots of shows do that -- but also authentic to the music business and to kids' real experience as they learn to grow up. I can't think of a show that does anything like it." "I am absolutely thrilled to embark on such an ambitious project to deliver a great new piece of entertainment to the kids audience around the world and be associated with such talent as Scooter and Mike," adds Pierre Sissmann, Chairman and CEO of Cyber Group Studios, as this project combines the two greatest passions of my professional life, music and kids and family entertainment.