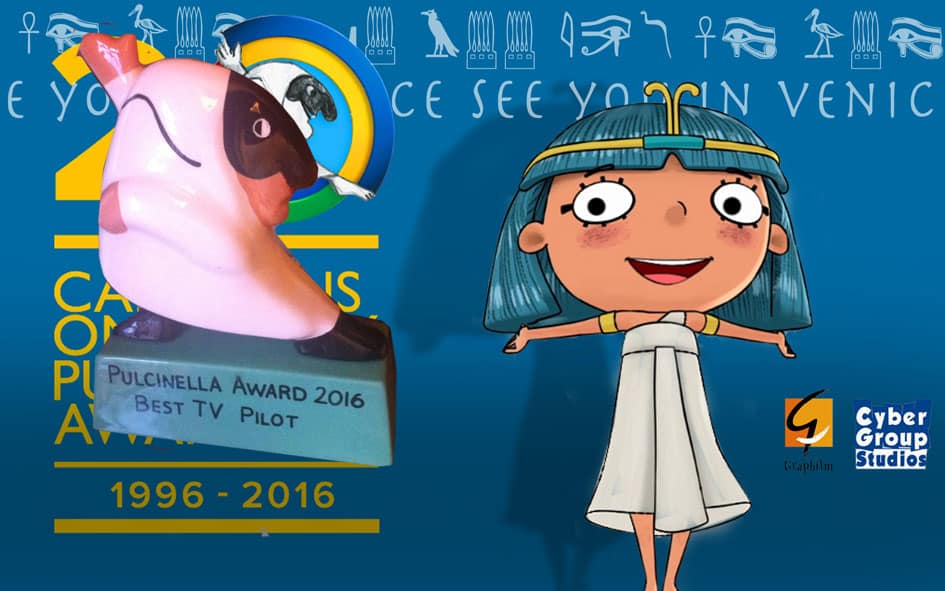 Paris, April 14th 2016. “Nefertine on the Nile” (52 x 11’ - 2D&3D -HD), an Italy and France coproduction from Graphilm and Cyber Group Studios, receives the prestigious Pulcinella Awards for “Best Pilot” at Cartoons On the Bay.

Cartoons on the Bay and the Pulcinella Awards are an international television and cross-media animation festival taking place every year in Italy. It benefits from a strong and very established international awareness, and is considered as one of the most prestigious Festival in the animation industry. Cartoons on the Bay, which celebrated its 20th anniversary, took place from April 7th to 9th, 2016 in Venice (Italy).

“Nefertine on the Nile”, coproduced by Graphilm and Cyber Group Studios is based on the series of books titled All’ombra delle piramidi (“In the Shade of the Pyramids”) by Janna Carioli and Luisa Mattia. Currently in development, this comedy & adventure animation series is geared towards girls and boys from 5 to 7 years old.

The show recounts the fun adventures of Nefertine – a special little girl endowed with lively intelligence, inexhaustible curiosity and great courage. She aspires to be the first female scribe in the history of Egypt, so she can describe the wonderful word that surrounds her. Indeed, the ancient Egypt of the pharaohs has many customs, traditions, colours and flavours that are lovely and intriguing at the same time. And, in fact, Nefertine is already a budding young journalist who uses her papyrus-diary to note down the adventures she has with her friend Piramses.

Pierre SISSMANN, Chairman and CEO of Cyber Group Studios says:
« After receiving the prestigious Pulcinella award for best international studio of the year in 2014, we are extremely gratified to receive this new award for our pilot of Nefertine coproduced with award winning studio Graphilm.”

Maurizio FORESTIERI, Chairman and Director of Graphilm, says:
“Nefertine is a great project that we strongly believe in. We are pleased and honored to receive the Pulcinella Prize and to share our enthusiasm with our partner, the award-winning Cyber Group Studios, a Europe-wide leader in the production of children’s TV series.”