FOLIVARI, WINDS AND CYBER GROUP STUDIOS TO JOINTLY COPRODUCE A NEW HYBRID ANIMATED SERIES “MENINO AND THE CHILDREN OF THE WORLD” 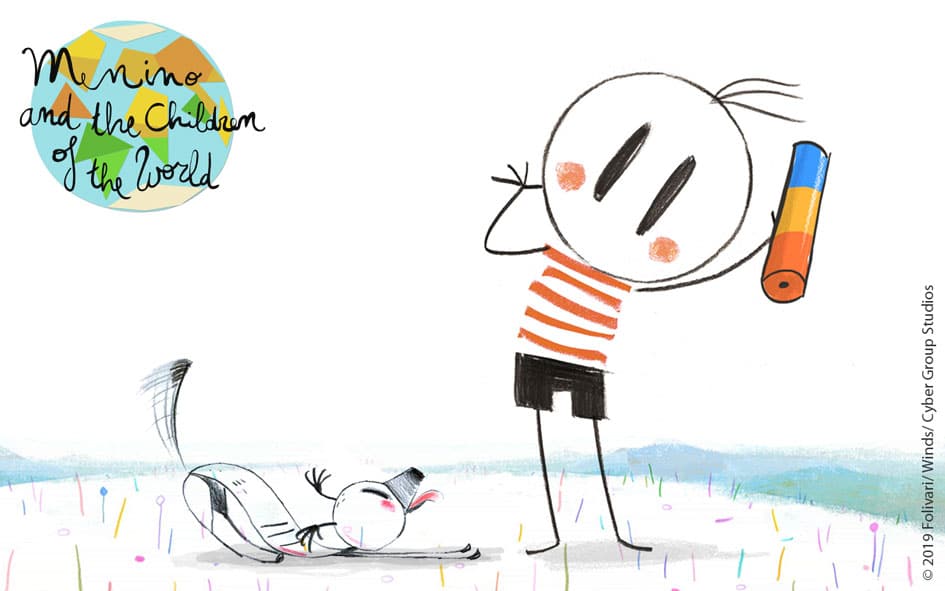 Paris, June 9th 2016. Folivari, Winds and Cyber Group Studios are pleased to announce the coproduction of “Menino and the Children of the World”, a hybrid series combining animation and live action.

Paris-based 2014 Pulcinella international studio of the year, multi-awarded animation production and distribution company Cyber Group Studios has joined forces with Folivari and Winds for the first time in a coproduction deal of its forthcoming animated and live action series.

Created by Folivari’s Didier Brunner, well known for “The Old Lady and the Pigeons”, “The Triplets of Belleville”, “Brendan” and “Ernest and Celestine”, “Menino and the Children of the World”, a 52 x 7 minutes series, follows the adventures of Menino, a little animated boy. In each episode, he leads us to discover real children, living in every corner of our magnificent planet. A traditional meal in the remote mountains of western China, a trip in the Kenyan savannah, canoe fishing in the Indian Ocean… As curious as he is clumsy, Menino is invested in the lives of children around the world, whose daily routines then take on the grandeur of extraordinary feats!

“Menino and the Children of the World” aims at children aged 4-7 years old and combines animation and live action. The series concept brings together two great aspects from two films in one single program. The first is a documentary film “On The Way To School”, which received the César for Best Documentary in 2014, and the second is an animated film, “The Boy and the World” by Alé Abreu, which received multiple awards such as the Cristal for Best Feature Film at Annecy Festival and was also nominated for the Oscar as Best Animated Feature in 2016.

Cyber Group Studios will also handle the distribution of the program worldwide and will start international presales of the show at MIFA in Annecy.

Pierre Sissmann, Chairman and CEO of Cyber Group Studios says:
“I am thrilled of this collaboration which will put to life a series destinated to kids around the world, showcasing the world of children diversity.”

Didier Brunner, Producer and Associate of Folivari says:
“Nothing that belongs to mankind is foreign to me” says Montaigne, a great Renaissance humanist. “This quote perfectly sums up this series’ambition, bring the children of the world to the other children of the world”, declares Didier Brunner, Producer and Associate of Folivari, who adds “We are very proud to coproduce this ambitious projects with our friends Winds and Cyber Group Studios”.