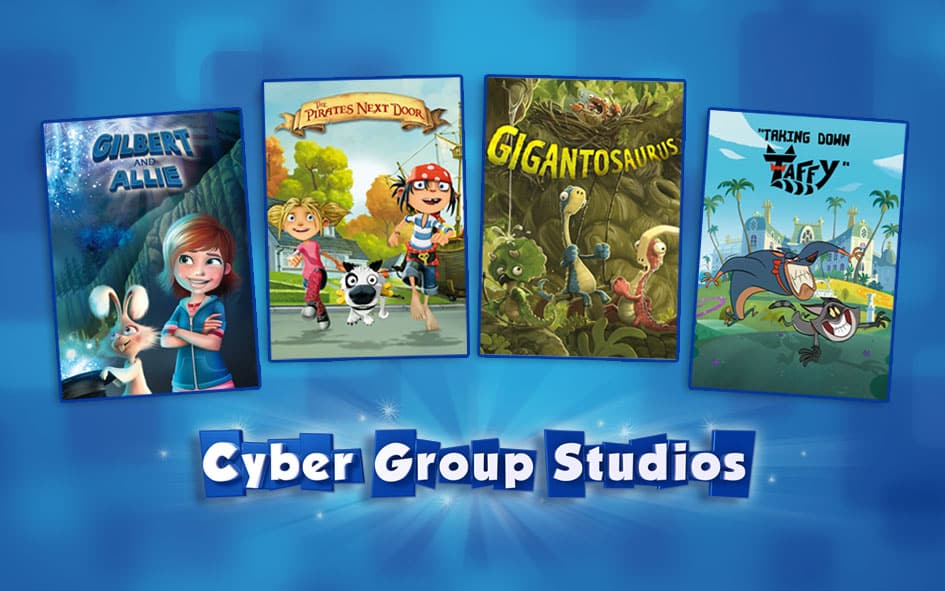 MIP Junior screening list compiled 30 of the most viewed children's series at the MIP Junior 2016 and for the first time ever a French producer, Cyber Group Studios, ranks in with four of its series in production and distribution.

Gilbert & Allie (52x11' HD - CGI) a new full CGI coproduction with Brown Bag Films for Disney EMEA, currently in production follows the adventure of a teenage girl, who just wants to be popular. One day, she discovers that she has extraordinary powers. Unfortunately, such powers can only be harnessed in partnership with an ancient and extremely grumpy magical rabbit who just wants to retire. Gilbert and Allie are both allergic to one another, but together they are magic.

The Pirates Next Door (52x11' HD - CGI), a comedy series produced and developed by Cyber Group Studios for France Televisions, based on the best-seller by Jonny Duddle, winner of the United Kingdom 2012 Waterstones Children’s Book prize is aimed at the kids market for 6 to 10-year-old children. The Cyber Group Studios’ property takes place at Dull-on-Sea, where quiet life is suddenly turned upside down by the appearance of a family of pirates. The program whose presales have just started has already been pre-bought by SVT (Sweden), NRK (Norway), AB Svensk (Scandinavia). The series will be launched on France Televisions in 2017.

Gigantosaurus (52x11' HD – CGI) a new preschool show produced by Cyber Group Studios for Disney Junior EMEA is aimed at the pre-school market for 4 to 6 -year-old children. Based on the work of the bestselling author/illustrator, Jonny Duddle, the series is set in the Cretaceous period 65 million years ago where four young dinosaur friends are about to leave their families and explore a world full of mysteries and danger. During their journey they will learn that daring does not mean rushing blindly into things, it is about stretching one's limits, becoming autonomous, being curious, and most of all daring to be yourself. Gigantosaurus’s trailer has been successfully revealed at Cartoon Forum 2015 in Toulouse (France) and has been even more successful at MIP Junior 2016 (France/Cannes) by ranking at no. 11 in the 30th most popular shows!

The series has already been pre-bought by Disney (Worldwide) and France Televisions (France).

Aimed at children from 6 to 12-year-old children, this animation and comedy series tells the story of Mrs. Muchmore and her beloved dog Bentley, who live a delightful life in their manor until the arrival of Taffy, a raccoon that is able to disguise himself into a cat. Mrs. Muchmore gets so fond of Taffy that she decides to have him in her Manor. But Bentley is no dummy and knows instantly that Taffy is not a cat. He’ll stop at nothing to take down the intruder!

Pierre Sissmann, Chairman and CEO of Cyber Group Studios says: “We are obviously thrilled with these results, which are a testimony of the hard work and dedication of all the talented artists and animation executives who have worked on these shows; and hope that soon they will reach their audience all over the world, which is what they are intended for.”