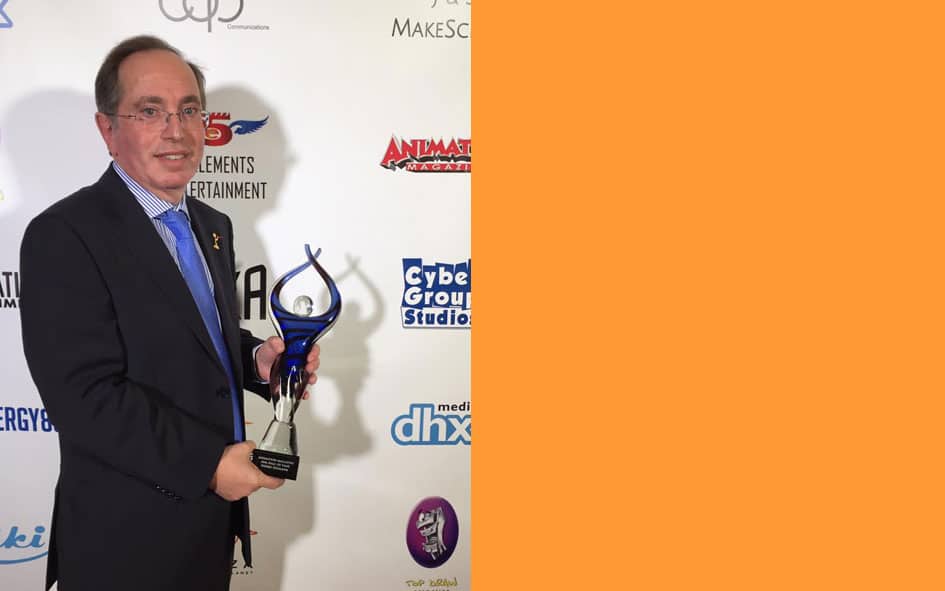 Los Angeles, November 2nd - At the occasion of the “Hall of Fame” Awards Gala held on Tuesday,

These projects cover all target age-groups of the kids’ space, as well as different types of animation techniques to reflect artistic diversity and sensitivities, such as traditional 2D, CGI, hybrid and 2D/3D.

The Hall of Fame Award recognizes outstanding individuals who, through their work and achievements, have made a significant contribution to the industry and a profound difference in the communities they serve.

Veteran Hollywood figure Michael Eisner, who served as president and CEO of Paramount Pictures and chairman and CEO of The Walt Disney Company, has congratulated Pierre Sissmann his friend and former colleague at the Ceremony praising the work Sissmann has accomplished.

Pierre Sissmann: Chairman, CEO and Founder of leading French animation company, Cyber Group Studios has more than 25 years of experience in the development, production and distribution of cultural and entertainment products.

He has been involved in the launches of TV channel, live and entertainment programs, music production and distribution and even in the creation of a press group.

After being a top executive at Sony Music for 10 years, he was promoted French VP of A&R, Marketing and Promotion, before joining The Walt Disney Company as President of the French branch, VP Executive for Europe, Middle East and Africa (EMEA) branch, supervising all the divisions of the company. Among other projects, he also created Walt Disney Animation France, the biggest European animation studio ever founded, which coproduced feature films such as The Hunchback of Notre Dame and Tarzan. ln 1996, he created Disney Channel France and became its first President.

Nominated for an International Emmy for the production of the blockbuster preschool hit ZOU and recipient of more than 65 international awards in eleven years, Cyber Group Studios became one of the leading European animation studios with the production of Zorro the Chronicles. Through its distribution branch, Cyber Group Studios also delivers programs to over 160 clients around the world.

In 2014, Cyber Group Studios received the awards for "International Studio of The Year", and in 2016 for "Best Animated Pilot" at the Cartoons On The Bay European event. In June 2016, the company received the prestigious French “High Growth Company Award” in the Media & Entertainment category from the French Ministry of Economy and Finance and The Leaders League. Since its creation in 2005, Cyber Group Studios, with an overall catalogue of 1 000 half-hours, has produced close to 800 episodes of TV animation.

Last night in Los Angeles, he received an important distinction for his work by receiving a lifetime achievement award at the World Animation and VFX’s "Hall of Fame".

Michael Eisner former Chairman and Chief Executive Officer (CEO) of The Walt Disney Company says: “Pierre Sissmann has been inducted into the Animation Magazine Hall of Fame. This is truly deserved! (…)It’s a great honor for me to be able to see someone that I work with so long, do so well (….) An exec with two ways to go, one is business (…) and the other one is creative”