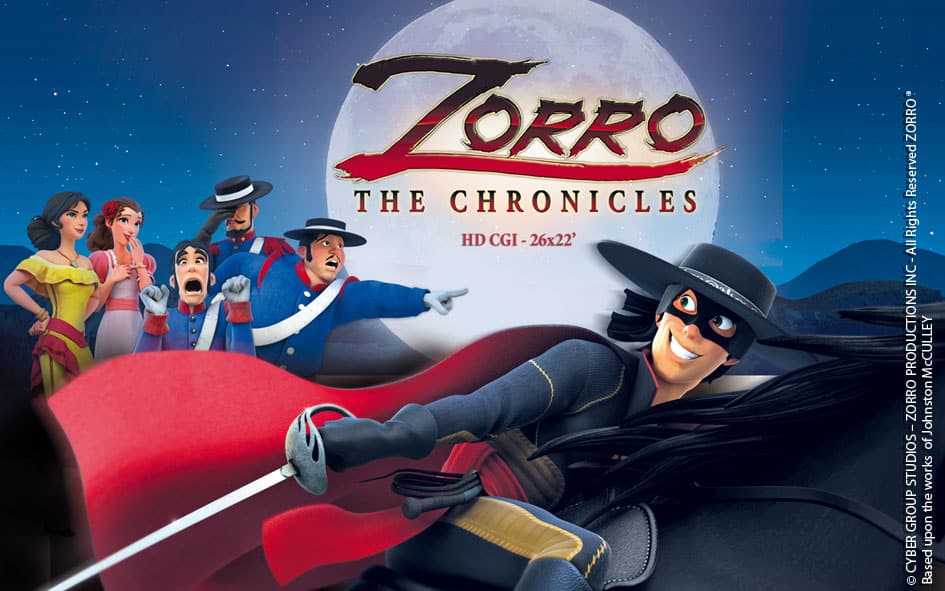 Paris, December 21ST 2017 – Zorro The Chronicles (26x22’ HD-CGI), produced by Cyber Group Studios in collaboration with John Gertz’s Zorro Production Inc. for France Télévisions and RAI, has been nominated at the 13th edition of the TV France International Export Awards.

This year, winners will receive their trophies during the Procirep French Producer of the Year Award ceremony on March 13th, at the Elysée Montmartre in Paris. Each winner will be designated by a panel of international acquisition executives and trade journalists.

The TV France International Export Awards distinguish best-selling French productions worldwide in three categories: Animation, Documentary and Fiction. The nominees are determined according to a scale of points which valorizes the work of marketing through the volume of the sales grossed.

Once again this year, a record number of entries has been registered. Thanks to its strong international sales results, “Zorro The Chronicles” (26x22’) has been nominated in the final round of the competition.

“Zorro The Chronicles” (26x22’) - written by Pierre Sissmann and Annabelle Perrichon, directed by Olivier Lelardoux, is an action comedy targeted towards children between 6 and 12. Since the highly successful launch of the series during the MIPJunior World Premiere Screening in 2015, the series, which follows the adventures of the famous masked hero, has been sold to major broadcasters and digital platforms all over the world. Deals cover more than 100 players such as HULU (USA), Amazon (India), RAI (Italy), Turner and France Télévisions (France), RTVE Clan (Spain), YLE (Finland), Globosat (Brazil), Kika (Germany), AL Jazeera (Middle East)…

In addition, the series has also been praised this year for its strong sales worldwide by the CNC and TVFI in a recent study named: “Historical records for the exports of French audiovisual programs”.

Pierre Sissmann, CEO of Cyber Group Studios says: “This is a great privilege to be nominated for such a prestigious award as it recognizes the excellence of the program which has travelled all over the world already for its first season.”