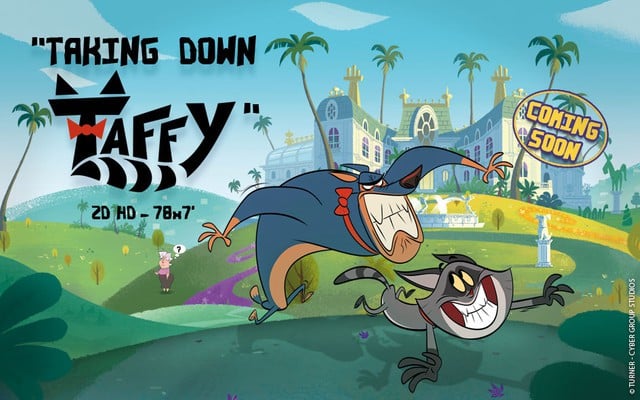 Based on an original creation from Cyber Group Studios and developed with Turner, Taffy follows the non-stop, slapstick extravaganza faced by loyal hound dog Bentley when his billionaire old lady owner Mrs Muchmore takes in an imposter posing as wide-eyed, fluffy angora cat. Each instalment sees Bentley try to reveal “Taffy” for the vermin he is – while super-clever Taffy handily frames the dog for every one of his exploits, pillagings and disastrous messes. Whether traveling from Mrs Muchmore's luxurious mansion, to a five-star cruise, to jet-setting international adventures or a visit with the President, wherever these rivals go, mayhem is sure to follow!

The 78 x 7-minute series, which will be produced in France, will join Boomerang’s line-up of funny, multi-generational shows like Tom & Jerry, Scooby-Doo, Mr Bean: The Animated Series and Grizzy & the Lemmings from Q4 2018.

Cecilia Persson, Turner’s Vice President of Programming and Content Strategy Kids EMEA & International Kids Acquisitions and Co-Productions said: “With its classic-look animation style and timeless, slapstick humour, Taffy couldn’t be a more perfect fit for Boomerang. We’re very excited to be working with Cyber Group Studios to produce the show, and further our efforts to build Boomerang as a second flagship kids channel with a strong and refreshing pipeline of content.”

Pierre Sissmann, Chairman & CEO, Cyber Group Studios commented: “It is an honour and a thrill for the Cyber Group Studios team of artists and authors to be working alongside the Turner International team to develop a new series for Boomerang and I hope this idea we had, Mike de Seve of Baboon Animation and myself, a couple of years ago, of creating this new slapstick character of TAFFY, will become a great addition to the cartoon line up of one of the most prestigious cartoon channels in the world.”