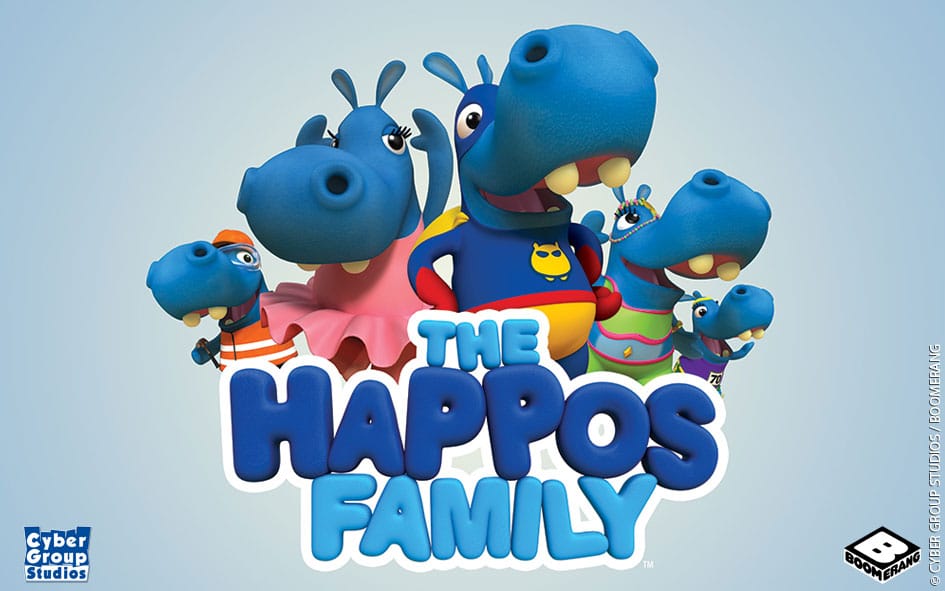 Turner EMEA announced today that it has greenlit a second season of its first ever Boomerang Original, The Happos Family – this time featuring longer adventures with the loveable Happos characters, as well as a raft of new digital content.

Series two, made up of 25 x 7-minute non-dialogue episodes, will launch on Boomerang channels from January 2018, and will introduce three brand-new characters to the family set-up: Football Happo, Scientist Happo and Acrobat Happo. It has been created in partnership with world-renowned Italian corporation Ferrero and will be produced by leading European animation company Cyber Group Studios (headquartered in Paris), with whom Turner recently signed a co-production deal for another new Boomerang series, Taffy.

Following a first series of 20 x 2 ½ minute shorts – which has launched on Turner Kids channel POGO (South Asia) and free-to-air channel Karusel (Russia), as well as Boomerang channels globally, reaching more than 88M viewers to date* – series two will offer kids and families the chance to become better acquainted with each of the unique and hilarious Happos and the safari park in which they live, where just about anything seems possible. Whether it’s Astro Happo longing to fly to the moon, or Stunt Happo attempting a daredevil feat, or Party Happo in a dance off with Ballerina and Bollywood, each storyline is laugh-out-loud, slap stick comedy with lots of heart.

In addition to the linear roll-out, the Happos characters will appear across a variety of interactive digital platforms, including the popular Boomerang Make n’ Race app (more than 20M downloads worldwide) alongside other Boomerang favourite characters Scooby-Doo and Tom and Jerry.

“The great audience reaction, channel exposure and performance of Happos to date are all positive signs that we have an exciting new franchise on our hands”, says Johanne Broadfield, VP, Cartoon Network Enterprises EMEA. “We’ve seen kids actually belly-laughing while watching the content and demonstrating really strong engagement with the humour and characters. Taking the show to a new level, with longer episodes and extensive support across digital, stands us in very good stead for a successful consumer products programme – and we’re looking forward to the reaction we get from prospective partners here at Vegas.”

Pierre Sissmann, Chairman & CEO, Cyber Group Studios added: “We immediately fell in love with The Happos Family and it’s not at all surprising that the show is already resonating with kids and families around the world. We’re delighted to be partnering again with Turner and coming on board to produce the second series of Happos, this time with longer stories and great new characters.”

The Happos Family follows the lives of a family of Happos who live in an enclosure in a safari park. In the morning the park is open to human visitors who drive past the Happos, taking pictures of them wallowing in the mud, lazing by the pool, sleeping in the shade of the tree. When the last car races out of the safari park and the gates are shut to all visitors, the Happos jump up out of the mud, wake up from their snoozing and get dressed up. It’s now their time for crazy, zany, Happo adventures.