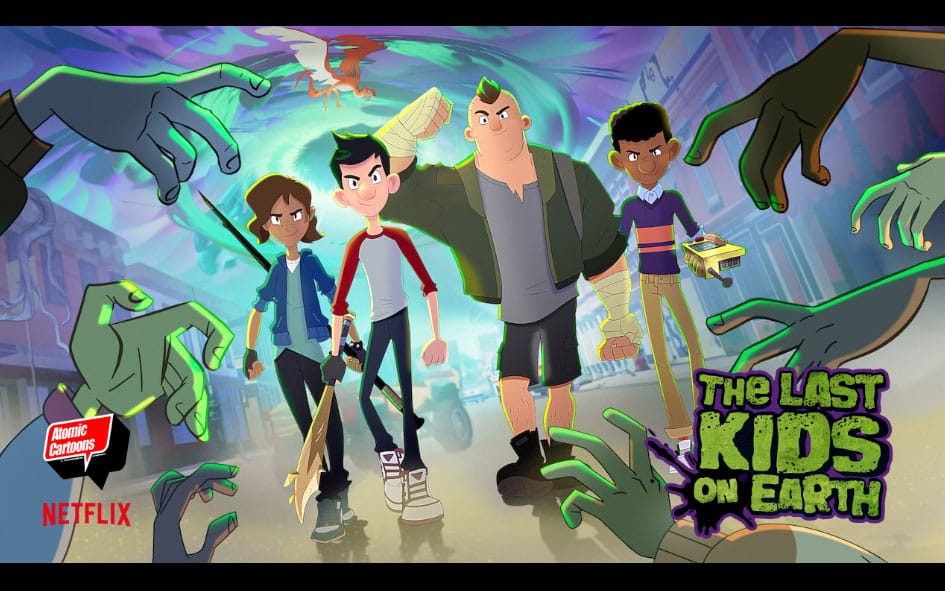 VANCOUVER / September 20, 2019 – Atomic Cartoons, Cyber Group Studios and Outright Games are pleased to announce a new partnership to produce The Last Kids on Earth video game. The new Netflix series, Last Kids on Earth, is based on Max Brallier’s bestselling books. The game is anticipated to launch in 2021 on consoles and PC.

The Last Kids on Earth video game will be created in consultation with the producers of the animated series, which began streaming this week on September 17, 2019. The intellectual property (IP) for the book series was optioned by Thunderbird’s Kids and Family Division in 2017, and Netflix acquired the worldwide rights to the TV series in 2018. Earlier this year, Cyber Group Studios became the worldwide representative for merchandising, ancillary and second window TV rights when an agreement was reached in February. In May 2019, a Master Toy deal was announced with Jakks Pacific Inc. to develop a range of products, including action figures, activity toys, role-play accessories, vehicles, plush items, novelty items, games, and play electronics. The toy line is set to hit shelves around the world in 2020.

“We are thrilled to have gamers play as our venerable series leads, Jack, June, Quint and Dirk, and partake in thrilling apocalyptic adventures throughout Wakefield – with both familiar and new monsters and zombies,” said Matthew Berkowitz, Chief Creative Officer, Atomic Cartoons and Thunderbird Entertainment. “The Last Kids on Earth is such a captivating series, and it is awesome to see it being embraced by audiences internationally and in many formats. Working with author Max Brallier, and evolving this story into a global franchise with books, an animated series, a video game and toy line, is an incredible experience for everyone at Atomic.”

About the Book Series: The Last Kids on Earth is a New York Times and USA Today bestselling book series, with millions of copies in print around the world. It follows Jack Sullivan and a band of suburban middle schoolers who live in a decked-out tree house, play video games, gorge themselves on candy, and battle zombies in the post-apocalyptic town of Wakefield. It’s a hilarious series filled with wisecracking kids, crazy gadgets, an endless supply of zombies and giant-sized monsters.

Commenting on the deal with Outright Games, Thierry Braille, Vice President, Interactive and Video Game Division, Cyber Group Studios, said: “We are delighted to come together with Atomic Cartoons and Outright Games to announce a video game based on The Last Kids on Earth. The combination of this wonderful IP and the very promising game design made by Outright Games will deliver an amazing video game which will contribute to expand The Last Kids on Earth universe”.

Terry Malham, CEO of Outright, also noted: “After reading the books, and getting a preview of the Netflix series, we jumped at the chance to work with Atomic Cartoons and Cyber Group Studios to develop a video game based on The Last Kids on Earth. It has all the hallmarks of a successful franchise – comedy, adventure, friendship, fun – and we look forward to gamers around the world coming along for the ride when we launch in 2021.”