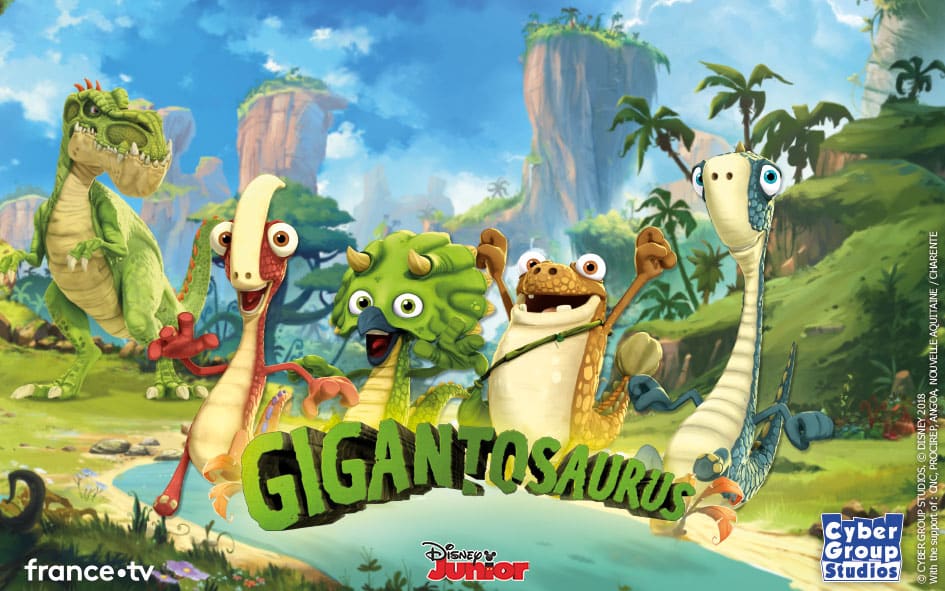 Gigantosaurus, the award-winning 52x 11’ CGI comedy-action series brings to life Jonny Duddle’s book published by Templar, which has sold more than 250,000 units in the UK alone and 450,000 globally. It features four fiercely-fun dinosaur friends – Rocky, Bill, Mazu and Tiny – who take pre-schoolers on exciting, comedy-filled adventures as they dare to be themselves and explore the world beyond their nests. The laugh-out-loud pre-school animation currently airs on Disney around the globe and is set to hit UK screens on free-to-air channel, Tiny POP, next year. The show is also confirmed to broadcast on free-to-air channels in other territories, such as France Télévisions, Germany’s Super RTL plus Italy’s Rai Yoyo. Content is also available ON Disney’s YouTube channel and will come to Netflix.

Cyber Group Studios started an extensive global licensing programme for Gigantosaurus – partners already on board include Jakks Pacific as master toy licensee, and Outright Games who are planning a video game to be published on PlayStation® 4, Xbox One, Nintendo Switch™ and PC. Publishing remains a priority for the IP, with Templar planning to publish the first of 40 new TV tie-in books across Europe in 2020. bRAND-WARD is now signing partners for launch late 2020/early 2021.

Cyber Group Studios will be showcasing the Gigantosaurus brand at this year’s BLE on stand F202 with a special focus on Gigantosaurus development for the next three years to come.

Pierre Sissmann, President and CEO, Cyber Group Studios says: “We are very pleased of our association in the UK with the new Brand Ward venture whom I have personally known the cofounders Jean Philippe and Trudi for many years as great professionals. It is an exciting time for us in the UK as Gigantosaurus will now be available to all the UK homes thanks to our association with Disney, Tiny Pop and Netflix. And we do hope it will meet with the same success as in the other world markets”