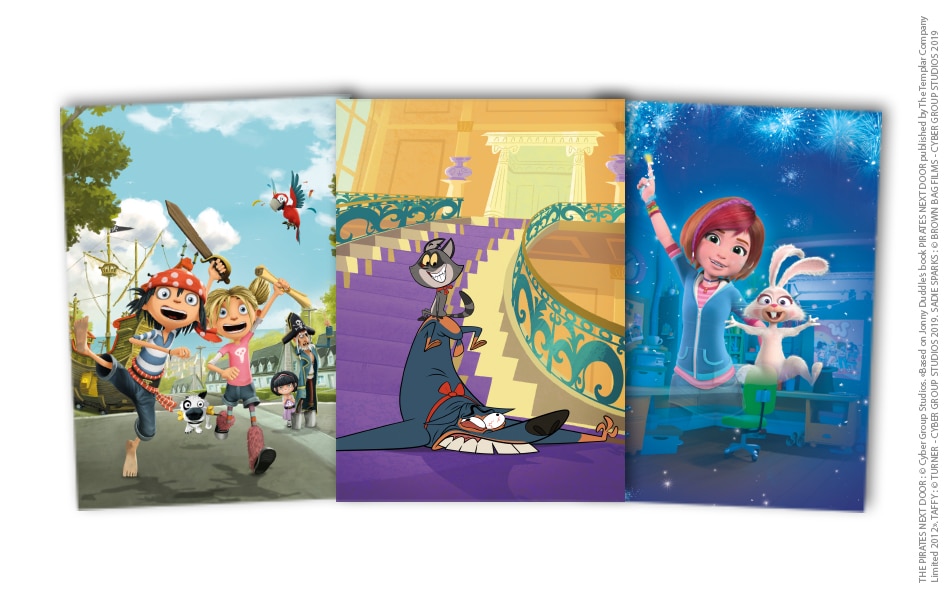 Under the terms of the agreement, BTC Studios PLC will develop interactive software games based on Cyber Group Studios’ catalogue hit series: Taffy, Sadie Sparks, and The Pirates Next Door.

“We’re very excited to be working with BTC Studios PLC to provide new experiences on our 3 successful TV series, Taffy, Sadie Sparks, and The Pirates Next Door,” said Thierry Braille, VP Interactive and Video Game division, Cyber Group Studios and and Dominique Bourse, COO, Cyber Group Studios. “BTC Studios PLC is an established player in the game market and has managed to concentrate a very strong group of talents to produce powerful games on our TV series.”

“We share excitement with our partner – Cyber Group Studios to kick off this high-potential project. We have already started production of the first two mobile games: Taffy: Feed the Kitty and Taffy’s Food Run. Within the next six months, we will start development of the next games, according to the agreed pipeline, as well as the broadcaster’s publishing schedule. The first commercialization is scheduled for the second quarter of 2020.” – said Jaroslaw Zeisner, COO, BTC Studios.

Taffy, the 78x7’ HD – 2D slapstick comedy series based on an original creation from Cyber Group Studios and developed with Turner, is already a worldwide success on Boomerang. The series is now airing on Disney (Germany) and will soon launch on France Télévisions (France).

The series, which is aimed at children aged 6 to 10 years old, has been selected to be screened at BAFTA kids Festival (London – United Kingdom) and selected to be part of the International Panorama TV Series in the Kids category at Cartoons on the Bay - Pulcinella Awards (Italy).

Sadie Sparks follows the daily life of a teenage girl who discovers that she has extraordinary powers. Unfortunately, such powers can only be harnessed in partnership with an ancient and extremely grumpy magical rabbit called Gilbert, who just wants to retire.

The Pirates Next Door, 52x11' HD – CGI, comedy series produced by Cyber Group Studios for France Télévisions, is based on the best-seller by Jonny Duddle, winner of the United Kingdom 2012 Waterstones Children’s Book prize. The series follows the daily life of a family of pirates who settles in a tiny seaside town. The series is already a worldwide success as it has been sold to over 100 countries and has been acquired by a large number of key broadcasters including: Clan (Spain), WDR / KIKA (Germany), RAI (Italy), NRK (Norway) and SVT (Sweden).

This humor and action-packed adventure comedy series has been officially selected by the Chicago International Children’s Film Festival– CICFF (USA) in the Animated TV / Animated Production category and has been screened at MONSTRA 2019 - Lisbon Animation Festival (Spain).

Cyber Group Studios is a leading producer and distributor of animated series, as well as a developer of global entertainment brands for children and families worldwide. Founded in 2005, the company has its headquarters in Paris, production studios in Paris and Roubaix (France), an office in Los Angeles (USA) and strategic partnerships in Russia and China.
Our company’s mission is to produce endlessly entertaining content for children around the world. We have a passion for telling great stories leveraged by a strong creative identity, a diversity of animation styles (2D, CG, real-time animation…) and an inspiring musical component or inspiring music
Screening RoomPrograms
about uslicensing
our newscontact us
Paris
44B Quai de Jemmapes
75010 Paris, France
ROUBAIX
25 Rue Corneille
59100 Roubaix, France
LOS ANGELES
3500 W Olive Avenue @1470
Burbank, CA 91505, USA