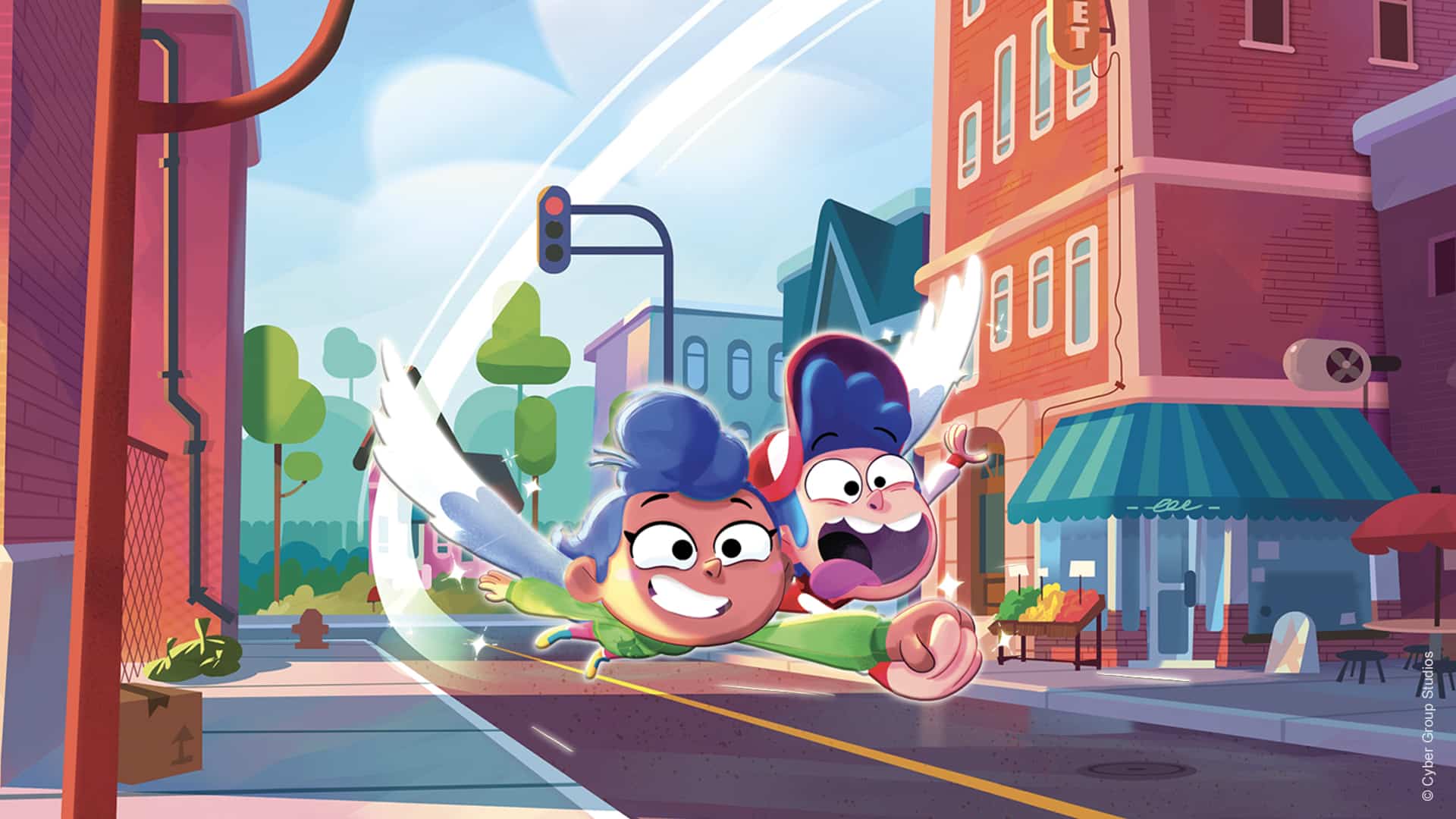 Paris – Wednesday June 17th, 2020: On the occasion of the new edition of the 2020 MIFA, in Annecy, France, Cyber Group Studios, is pleased to announce that its brand-new animated series 50/50 Heroes, developed with pubcaster, France Télévisions is leading into production this June. Key European broadcaster partners are soon to be announced.

The 52x11’ 2D-HD comedy series, aimed at children from 6 to 10 years old, follows the adventures of Mo and Sam, half-brother and sister, aged 11 and 9. One day they find out that they have inherited some powers from their great-great-great-grandma who had a fling with a superhero many moons ago. But, as half-siblings, they must share these powers down the middle. Upshot: these two “sorta superheroes” run half as fast, turn half-invisible! No latex suits for these heroes, and no missions to save the planet. But having superpowers can be actually very cool when you are a kid. What about using it to get this ice cream or to go to the movie theater with your friends while you have to be somewhere else with your mom at the same time! All our half-brother & half-sister Mo and Sam will need to do to make these superpowers work is simply to be on the same page…. But this will be quite a challenge!

Superpowers, crazy adventures, fun, comedy, friendship and family are all here together in the first season of this bold and hilarious series.

50/50 Heroes is based on an original idea of Romain Gadiou and Chloé Sastre, co-writers of Cyber Group Studios’ Mirette Investigates and Tom Sawyer animated series. Graphic designs have been made by two key artists from renown “Collective Steak”: Yann de Preval for character designs and Anthony Vivien for the backgrounds, who have worked on series such as 101 Dalmatian Street and Muffin Jack. The series will be directed by the talented Cédric Fremeaux, who served as Storyboard Supervisor on the Chip’N’Dale reboot.

Cyber Group Studios is proud to say that the series will be mostly produced out of the company’s studios,both in Paris and in Roubaix, and will use a 2D technique together with an in-house special effects’ technology developed by Cyber’s Research and development (R&D) department.

“ I am particularly happy to work with France Télévisions on this new comedy series and to work together with such talented artists both in our Paris and Roubaix studio , dedicated to create new animation using groundbreaking technology for our upcoming productions in CG and 2D,” said Pierre Sissmann, President and CEO of Cyber Group Studios.

Tiphaine de Raguenel, Head of Young Publics and Animation France Télévisions, adds: “A promise of a stunning comedy, 50/50 Heroes is the ambitious original creation that France Télévisions was waiting for on the theme of relations between half-brother and half-sister with a not at all serious tone. With Mo and Sam, this series invents a duo of a new genre half-superhero half-brother and sister. Two children faced with their own desires and their needs to find solutions together. At the end of each story, they will have learnt something about themselves, which will help them grow. 50/50 Heroes will undoubtedly be the next big success of Cyber Group Studios and we are happy to offer it exclusively to our audience on Okoo. “