Zorro The Chronicles, The Game coming this fall! 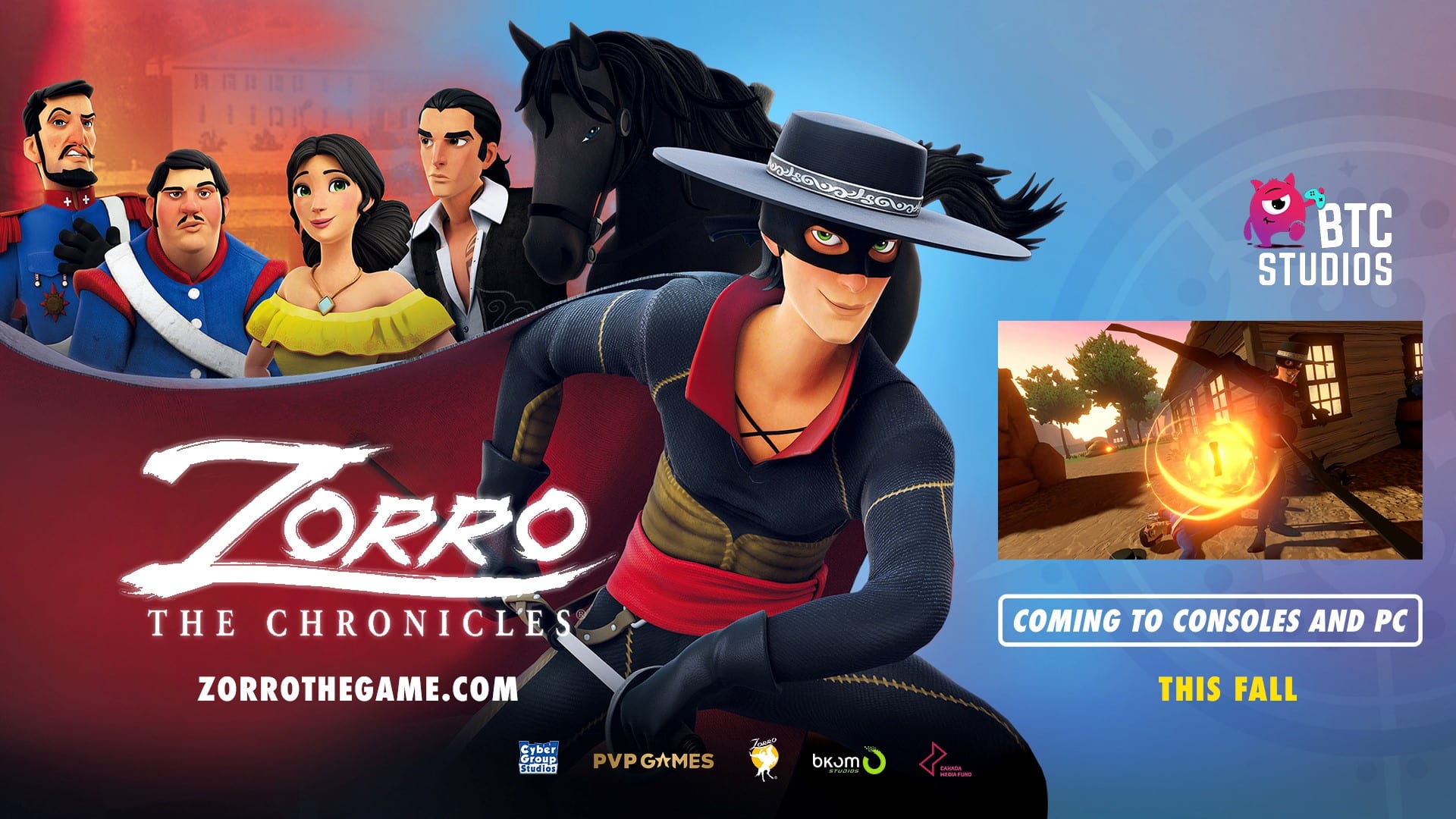 Warsaw, Poland – Friday March 19th, 2021:  PVP Games is proud to unveil the Zorro The Chronicles, The Game, in collaboration with Paris and Los Angeles-based producer and distributor Cyber ​​Group Studios, that will be published by BTC studios.

To receive the latest news from Zorro The Chronicles, The Game, add it to your Steam wishlist: https://store.steampowered.com/app/1571460/Zorro_The_Chronicles//

Developed, on behalf of PVP Games, by Bkom Studios, renowned for their collaboration with US Majors on “AAA” franchises which has resulted in great action-adventure games, Zorro The Chronicles, The Game is a fun and action-packed video game targeted at all public, as is its hero character Zorro, beloved for nearly a century by young and old alike around the world.

The game is published by BTC Studios S.A a Warsaw-based developer and publisher of mobile and console games.

The game is adapted from Cyber Group Studios’ hit animated series Zorro The Chronicles, produced in collaboration with John Gertz’s Zorro Production Inc. The international blockbuster show has been sold in over 100 countries and nominated at the 13th edition of the TV France International Export Awards.

Embark on an epic adventure set in nineteenth-century Spanish California. Play as the legendary Zorro or his fearless sister Ines. Protect the weak and innocent townspeople from the evil general and his soldiers. Develop skills to become a master swordsman. Disarm your enemies with a whip, a sword, spectacular moves, and humour! Deflect their attacks with acrobatic moves and lightning-quick reflexes. Leave your mark on them with a ‘Z’ from the tip of your sword!

John Gertz, President of Zorro Productions Inc. comments: “Zorro is a brand whose interactive life started long ago with games for the Atari, Nintendo and other platforms. We are very excited to see that the new CG animated series, “Zorro the Chronicles” will now be adapted for the new consoles of the 21st century”.

“We thank both John Gertz at Zorro Productions Inc. and Pierre Sissmann at Cyber Group Studios to have trusted us with this prestigious IP. We are very excited by the results of Bkom’s development and we look forward working with BTC Studios to market the game around the World and to contribute making Zorro a hero that kids and their parents will continue to adore!” added Francois Trudel, Vice-President/Executive Producer of Groupe PVP inc.

“Zorro is a cross-generation modern hero. We trust that Zorro The Chronicles, The Game, inspired by best-in-class action-adventure games will appeal to casual gamers kids and families and also to the gamer audience” said Thierry Braille, Vice President, Interactive and Video Game Division and Dominique Bourse COO at Cyber Group Studios.

ABOUT ZORRO THE CHRONICLES, THE GAME:

Don Diego de la Vega, the beloved son of a respected landlord, is returning to California after five long years in Spain.  Longing for his father and sister Ines, his heart is filled with joy in anticipation of seeing them again and returning to his peaceful town. However, things are no longer the same as when he left. The town is now ruled by Captain Monasterio whose greed only rivals his ambition. Poor townspeople who cannot pay exorbitant new taxes are sent to jail, and their families are forced to work off the debt. The once joyful community is now a place of oppression and hopelessness.

Don Diego cannot stand the injustice he sees, but at the same time, he knows he cannot openly fight Monasterio and his soldiers. However, where there’s a will, there’s a way. Don Diego acts upon the old Spanish saying, “If you can’t fight like a lion, become a fox”, and this is how the legend of Zorro is born!

• Live a hero’s life, and fight for justice. Play as the legendary Zorro or his sister Ines. Develop your skills by unlocking better stats, new moves, and talismans.

• Choose your playthrough style. Adapt your approach to a wide variety of enemy types. Use ninja-like stealth to take your opponents by surprise, sneak around them to explore your surroundings, or engage them in action-packed sword fights.

More information about the game is available on the official website https://zorrothegame.com